Home Test page Facing our own humanity: A review of Sono Ayako’s Miracles

Facing our own humanity: A review of Sono Ayako’s Miracles

Maximilian Maria Kolbe has become a brilliant pillar and testament to Christian sacrifice in the decades following World War II. It was a war that dipped beyond the technological advances that contributed to all the horror witnessed in the late thirties and early forties. It was a war that saw the human intellect contrive ways of invading and denigrating the personhood of other human individuals, and ways to diminish their hope, that left the world a different place afterward. 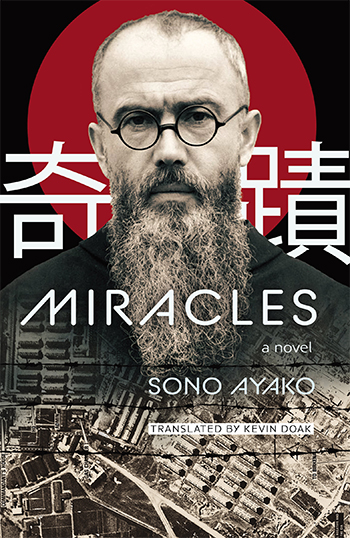 St. Maximilian Kolbe is one of numerous saints to be molded in virtue during this time of conflict both internal and external. His life – along with those of contemporaries like St. John Paul II, St. Padre Pio, Takashi Nagai, Fr. Joseph Verbis Lafleur, Fr. Placido Cortese, and Bl. Titus Brandsma – is one of a litany of bright lights that stand as endearing beacons of hope against the working of evil in our world.

Author Sono Ayako (b. 1931) is a decorated writer in her native Japan, but many of her literary works have yet to be translated into English. Thanks to the labors of Prof. Kevin Doak, we now have a translation of Sono’s slim but substantial novel Miracles. The book uses as a cornerstone of its plot the life and death of Fr. Kolbe, the Franciscan friar with a tremendous work ethic and, evidently, an unquenchable sacerdotal ethic. Kolbe is not merely a representative ideal of a belief. He is a historical fact to be reckoned with. His beliefs, rooted in Truth, were his way of life—and of death.

Published by Wiseblood Books, together with the Benedict XVI Institute, Miracles does not so much focus entirely on Kolbe’s life and sacrifices as it does on the sacrifices and losses of others. The narrator, who reflects many of the attributes and actions Sono herself experienced, is a Japanese journalist who delves into the history of Kolbe and the miraculous healings attributed to his intercession. All the while, the reader confronts the musings, the doubts, and the prying queries of the writer’s inquisitive mind.

In Doak’s “Introduction,” he notes Sono’s book is an example of the watakushi shōsetsu genre, or “I-novel,” which combines elements both fictitious and historical. While many of the points provided about Kolbe are factual, they make up only a sub-plot to the narrator’s travels and encounters with locals in Poland, Italy, and beyond. Kolbe’s monumental sacrifice occurred decades in the past at the time in which the novel is set. Intrigued by who Kolbe was, Sono followed her curiosity all the way to his beatification on Oct. 17, 1971. Initially serialized, Miracles was published as a complete single volume in 1973. This same year, Sono admitted that many of the characters she drew up in the novel were indeed based on real people.

Compared to your average novel, Sono draws heavily from other literary and biographical sources. Her favorite is Maria Winowska’s Our Lady’s Fool, an eloquent biography of Kolbe that was later repubished under the alternate title The Death Camp Proved Him Real. In Winowska’s book, the underlying question she seeks to ask and perhaps to answer is, What is a saint? Or: Who can really show me the face of sanctity? Likewise, Sono has a particular question, a heavy inquiry into human nature that’s one of the oldest questions humanity has continually asked itself, What does it mean for us to love?

Fr. Kolbe’s ultimate sacrifice and his daily devotion to Christ and the Blessed Virgin Mary are the impetus driving that question, a basis which eventually segues into other deeply challenging questions: What is Man? What point is there in suffering? What is a life’s true merit? And so we are taken on a rollercoaster of interviews, snippets into the lives of others—those known to Kolbe in life and those who knew of him later as a source of divine consolation.

Sono describes Maximilian Kolbe’s sacrifice in the concentration camp—substituting his life in place of a condemned man who agonizingly proclaimed himself to be a husband and father—as “a most journalistic death.” By this, of course, it’s meant that the circumstances, although initially unsung, were nonetheless extraordinary and attention-grabbing. Here was a man who willingly put himself on the line for a fellow human being, not even a man he could call “friend,” for the two didn’t really know each other. All that the shaved Polish friar knew was what he heard: a man desired to live for love of his family. Kolbe died, several weeks later, after enduring an extended period of starvation.

But Kolbe himself was also a rather journalistic man: a Franciscan with a pen, a printing press (occasionally), and the urge to do whatever might be the Virgin Mary’s good pleasure. He often began his letters and addressed his peers in person with the ejaculatory greeting Maria! He was wholeheartedly devoted to the Blessed Mother and, thereby, to her Son, Jesus Christ.

As the narrator’s understanding of Kolbe’s deep fixation on the Virgin Mary matures, she portrays ever more beautifully this relationship the friar had with the Mother of God. Mary, Queen of Heaven, was absolutely vital to Kolbe’s spirituality, and while we struggle in our own lives amid turmoil and doubts we can all take notes on this saintly relationship. Like Kolbe, all the saints have recognized Mary as mediatrix between us and Jesus her divine Son.

While some of the Mariology that Sono tackles near the end of the novel is beautifully illustrated, there are times where the theological premises are not given the full treatment they need. When quoting a letter attributed to St. Jerome, Sono shows an openness to the idea that Mary’s body was left to decay on earth. This, however, is inconsistent with the belief in the Assumption, or Dormition, of Mary, which refers to the Blessed Mother being assumed body and soul straight into Heaven, most likely immediately following her death.

In another instance, Sono defines First Communion rather matter-of-factly as “the ceremony where, after the age of reason, one receives for the first time the bread that is a symbol of Christ”. I would venture to make two theological points on this inherently flawed, watered-down description.

First, the sacrament of the Holy Eucharist, or Communion, is not mere bread. Once consecrated, this substance is the actual Body of Christ under the appearance of bread—and not actual bread any longer. Second, while it might be said that the Sacraments are “symbols,” they are utterly unique in the nature of their significance. The Sacraments don’t just signify things. Sacraments effect or enact the very things they signify. Thus, the Eucharist truly is the Body of Christ—just as Baptism truly removes original sin from the soul of the recipient.

These specifications, though undeniably major in the fabric of Catholicism and all of reality, are far and few between in the novel and are permissible blemishes for the discerning and knowledgeable reader. After all, Sono’s own faith is fragmented, regularly being broken down and built back up. For us, however, it is important to recognize in the Eucharist the Real Presence of the divine Person of Jesus Christ, the source from which faith, hope, and love flows.

By the climax of her novel, Sono offers brilliant imagery conveying the inevitability of God’s attractiveness, that He is the center of all—and all things orbit around Him in their varying luminosities. Those who turn to sadistic ways before God and man are like cold, dead moons. But I like to think of Fr. Kolbe as a star in the crown of the Blessed Virgin Mary, Warrior-Queen.

In Miracles, Sono seeks to find a man who has lived a worthy life, accepting of sufferings, brimming with love. In Winowska’s biography, the author seeks a saint, one who lives carrying the image of God “as in a living monstrance.”

Sono has provided the key to both. She found the man, the way of life, the glimmer of divine love—in an unhealthy, exhausted Polish friar who had a zeal for his Heavenly Mother Mary and died in cruel conditions in a Nazi concentration camp. As she observes of the saint’s enduring faith:

So long as Man remains framed by human goals, he remains at a standstill. Father Kolbe’s goal was God. He tried to be the best person he could in order to reach God. Every person he met and every method was mobilized for that purpose.

Share on FacebookShare on TwitterShare on PinterestShare on EmailShare on LinkedIn
Longtime Texas pastor asked to return home to Spain, after celebrating 100th birthdayColombian bishop implores ill woman to not be euthanized