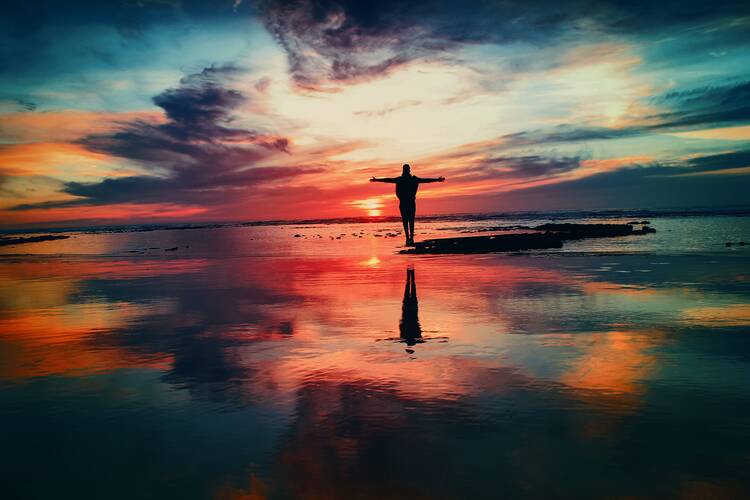 A Reflection for Monday of the Nineteenth Week in Ordinary Time

“​​As I looked, a stormwind came from the North,

a huge cloud with flashing fire enveloped in brightness,

In 2019 I spent a semester training to be a spiritual director at the Jesuit School of Theology in Berkeley. Aside from the chance to absorb the decades of experience brought to the classroom by the two instructors, my favorite thing about each day’s class was hearing about my classmates’ experiences of God.

With students from all over the world and at different stages of life, both religious and lay, there were wildly different encounters to break open and discuss. I especially loved sitting with classmates who were women religious from South Korea and Uganda, and hearing their experiences of God so enriched by the cultures of their home countries, but still universal enough to make sense to their Californian classmate.

The prophet Ezekiel, writing from exile, has a visionary, mystical experience of God. From his exile in Babylon, Ezekiel’s vision of YHWH might not seem logical to modern readers, but what vision of God makes any kind of logical sense? From Julian of Norwich’s vision of God holding a universe the size of a hazelnut, to the Jesuit who once told me he suspected God moonlights as a stand up comic, to a friend’s explanation that he sees God in the wizened faces of elderly women, to Ezekiel’s own flaming vision, no one’s idea of God is exactly the same as another person’s.

Jesus’ own use of metaphors, parables and other creative imaginings lets us know that we have permission to imagine a God who is as expansive as possible within the infinite scope of our imaginations.

In 1877, Gerard Manley Hopkins, studying to become a Jesuit, sent his mother a sonnet he’d written “in a freak the other day.” Hopkins wrote that “The world is charged with the grandeur of God./ It will flame out, like shining from shook foil.” Does this make logical sense? No. I’ve in fact heard many people complain that they “don’t get” Hopkins. But his own vision of God as “the dearest freshness deep down things” that “morning, at the brown brink eastward, springs” is deeply akin to Ezekiel’s own “bow that appears in the clouds on a rainy day.” We don’t need to understand “shook foil” to know that Hopkins is talking about God’s radiant light, nor do we need to see God seated on a sapphire throne surrounded by flaming angels to understand Ezekiel telling us that God is so magnificent and so large and incomprehensible so, sure, why not?