Demonic Foes a thorough, scholarly analysis of the phenomenon of diabolic attacks

The skeptics and the naysayers are usually quick to dismiss accounts of demonic activity as myth or outdated cultural ideas, but what Dr. Gallagher has written on the subject must be taken seriously. 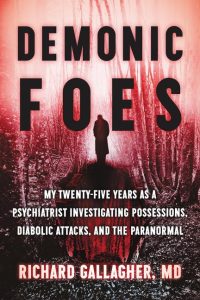 One morning 25 years ago he was approached by a priest who wanted him to examine a woman the priest believed was suffering from a demonic attack. She was covered in bruises and claimed an invisible spirit regular beat her. Finding nothing mentally or physically wrong with the woman, Dr. Gallagher concluded this was not psychosis but something else entirely.

Since then he has investigated and experienced the history and present reality of demonic activity and exorcisms. He is the longest-standing American member of the International Association of Exorcists serving as a scientific advisor on its governing council as the only layman and sole psychiatrist. While consulting hundreds of priests and other ministers he has witnessed more cases of demonic possession and oppression than any other psychiatrist in the world. For many years he has taught pastoral counseling to future priests at St. Joseph’s Seminary in Yonkers, including me back in 2015.

This October he published Demonic Foes: My Twenty-Five Years as a Psychiatrist Investigating Possessions, Diabolic Attacks and the Paranormal. It is an important and unique contribution to the study of this controversial topic. The many statements by Pope Francis on the reality of demonic activity or the two books written by the most experienced exorcist in the world, Fr. Gabriele Amorth, are likely to do little to convince the many skeptics and naysayers. What has been missing from these efforts is a more “credible” source that treats the topic scientifically. This void has been filled by Dr. Gallagher’s new book. As Dr. Joseph T. English notes in his forward to Demonic Foes: “… his book may well be unique in history: the serious treatment of a long-disputed topic by a superbly credentialed academic physician—a full professor of psychiatry—who can actually offer personally informed accounts in painstaking detail of modern-day examples.”

The existence of demons

The existence of demons is de fide, both divinely revealed in Sacred Scripture and defined as dogma by the Church.

God created all things, both visible and invisible. Faith tells us there are in this universe the angels whom we cannot see. They, like God, are pure spirit. They possess the Beatific Vision and are always in contact with God through their prayerful contemplation, adoration and intercession on our behalf. Like us, the angels have intellect and free will. Just as we humans were put to the test in the Garden of Eden, the angels were put to the test in heaven. They had to merit the Beatific Vision by choosing to remain faithfully in God’s service. Many angels did not, however.

The greatest of them, identified by tradition as Lucifer (“Light-bearer”), led a rebellion against God and invented evil. He did this out of his prideful disdain for the Incarnation—that human nature was to be assumed by Jesus—the Second Person of the Trinity. The angels have a higher nature than we men. Lucifer was appalled at the notion of serving a God Who would take on our lowly human nature which is beneath the dignity of his own angelic nature. Because God was to become a man in the Divine Person of Jesus Christ, Lucifer rebelled against the Lord with the cry “Non serviam!” (“I will not serve”). When Lucifer fell he became Satan (“the Accuser”), and many other angels joined his sinful rebellion. The rebellion of these fallen angels which we call demons, was met with resistance by the heavenly host led by St. Michael the Archangel.

The demons were cast into hell but are also active here on earth prowling about seeking the ruin of souls. The Book of Revelation reveals all this (Revelation 12:7-12).

Satan’s greatest triumph in our own day are the two errors C.S. Lewis warns against in his famous novel, The Screwtape Letters: “There are two equal and opposite errors into which our race can fall about the devils. One is to disbelieve in their existence. The other is to believe, and to feel an excessive and unhealthy interest in them. They themselves are equally pleased by both errors and hail a materialist or a magician with the same delight.”

Dr. Gallagher’s book is a good antidote to both. The reader will learn much about this topic and find the evidence presented to be credible but startling enough to dissuade one from morbid curiosity.

Though Dr. Gallagher is a faithful Catholic, Demonic Foes is not written with a doctrinaire or Catholic inclination. As both a physician and a believer, he wrote this book with a desire to strike a sensible balance between extreme skepticism and naïve credulity.

Demonic Foes presents a true scholarly perspective into the phenomenon of demonic activity—a multidisciplinary approach with a mix of medical, historical and spiritual insights. While reviewing several of the cases he worked on, Dr. Gallagher sheds light on a number of important and interesting topics.

Demonic attacks don’t just come out of the blue but seem to always involve some form of dabbling in the occult. Some cases presented involve common practices found in Hispanic communities such as Santeria, an Afro-Cuban folk religion, or devotion to the Mexican folk saint Santa Muerte, which is especially prominent among members of the infamous gang, MS-13. The most shocking case in the book involves the high priestesses of a Satanic cult. Other cases presented have their origins in less overt affiliations with the occult.

Belief in New Age ideas is growing. There has been a recent proliferation of neopagan practices such as witchcraft which Dr. Gallagher believes “arise primarily out of a personal rebellion against monotheistic religions, along with some of their moral codes and demanding creedal systems.” Many still foolishly “play with fire” when they flirt with spiritualism, yoga, astrology, Ouija boards and Tarot cards.

The different types of demonic attack classified as either possessions, oppressions, or infestations are spelled out. Amidst all the disturbing details of each case, the perspective of the compassionate physician is never lost in Dr. Gallagher’s writing. These are tortured individuals seeking help. The major task of the physician assisting the exorcist is to differentiate what may be termed troubles of the spirit from troubles of the mind. If no diagnosis could be made to explain the sufferings of the patient then the ritual of exorcism is recommended—the gripping accounts of which are described in detail.

In the seminary, Dr. Gallagher taught us a course titled pastoral counseling. When the topics of possession, diabolic attacks and the paranormal came up he was always measured and insisted that as priests, we not be overly credulous or in any way fall for, or promote, superstition or harmful exaggerations. Things being equal, he did also share the details with us about some of the cases he came across where he could determine no natural explanation for the patient’s condition. In these cases, he saw relief come only by means of the rites of exorcism.

I remember a story he told us about how he and his wife were woken up one night around 3:00 a.m. by their two normally docile cats who inexplicably began to go wild, acting in a very strange and frightening manner they never had before. The two were scratching and clawing at each other intent on inflicting some serious harm. As they were separated into two different rooms they continued to grow and bristle. Awaiting Dr. Gallagher in his office the next morning was a woman referred to him by an exorcist-priest who claimed to be the high priestesses of a Satanic cult. She greeted him with the question “How’d you like those cats last night?”

I recall being quite taken with this story when I heard it those years ago back at the seminary. In Demonic Foes, this case along with many others are expounded upon in detail. Dr. Gallagher presents persistent but unequivocal factual evidence of demonic attacks in a contemporary context. The open-minded reader should find it to be a compelling, informative, and sobering read.

My Twenty-Five Years as a Psychiatrist Investigating Possessions, Diabolic Attacks and the Paranormal
By Dr. Richard Gallagher
Harper One, 2020
255 pages $27.99

Share on FacebookShare on TwitterShare on PinterestShare on EmailShare on LinkedIn
We believeSan Francisco archbishop's exorcisms highlight controversy over Serra, conflict with Indigenous