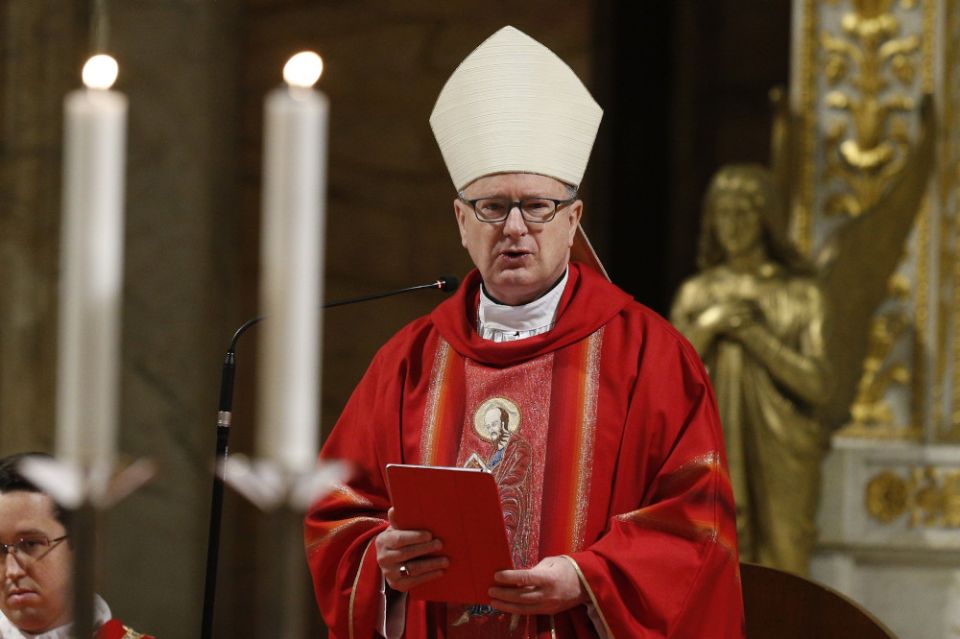 Bishop Michael Barber of Oakland, California, gives the homily at the Basilica of St. Paul Outside the Walls in Rome Jan. 31, 2020. (CNS/Paul Haring)

We are living in a time of unprecedented polarization in the country and within the U.S. church. And so it is depressing to see how some bishops and bishop whisperers are engaging in the kind of culture war tactics that not only impede affective collegiality but traffic in nastiness of a kind never before seen on public display.

These culture war tactics are especially jarring because the bishops are on retreat together this week. In his recent article in The Wall Street Journal contrasting the leadership approaches of San Francisco Archbishop Salvatore Cordileone and San Diego Cardinal-designate Robert McElroy, Francis Rocca noted that on this retreat, the bishops would focus on topics including “community and fraternity among the bishops,” and “unity and mutual support among bishops.”

Rocca interviewed Oakland Bishop Michael Barber, who proceeded to misrepresent McElroy’s position on legalized abortion and to do so in a way that did little to support community, fraternity, unity and mutual support among the hierarchy. Rocca wrote, “[Barber] said that Bishop McElroy acknowledges the injustice of abortion but evidently thinks ‘it’s not wrong enough that you need say or do anything about it or interact with the politicians who are publicly promoting it.’ “

That is a slur. At San Diego’s Walk for Life earlier this year, McElroy acknowledged the prospect of overturning Roe v. Wade, which would return the issue of abortion to state legislatures. He said, “It’s going to be a very hard road [in California], but at the same time for our country this is a really wonderful moment.” McElroy also said, “This is a moment not to cease or downsize our efforts but to redouble them here in California.” Does that sound like someone who doesn’t think abortion is not very important?

What McElroy opposes is weaponizing the Eucharist (he coined the phrase) in an effort to get legislators to oppose abortion rights, as Cordileone has not only advocated but, in the case of House Speaker Nancy Pelosi, actually implemented. The issue is not abortion. The issue is whether the act of legislating about abortion entails an intrinsic evil. And legislating inevitably involves prudential judgments. McElroy delivered a lecture on precisely this point that NCR published in 2020.

Such distinctions are lost on bishops like Barber and Cordileone. It can be said of Cordileone what was once said of Secretary of State John Foster Dulles: He is the only bull who brings his own china shop with him. McElroy recognizes that such a combative approach has only served to bring the culture wars within the walls of the church, but he is decidedly pro-life and Barber’s insinuation to the contrary is despicable.

It was something else Barber said in that interview, however, that may be more significant because it sounded more like a meme, and memes can catch on. Barber indicated the two prelates “represent ‘two forces in the church right now.’ ” Rocca observed: “The former reflects the priorities of Pope Francis and the latter those of St. John Paul II (the former pope) and Pope Benedict XVI, who stressed the need to challenge politicians on abortion.” 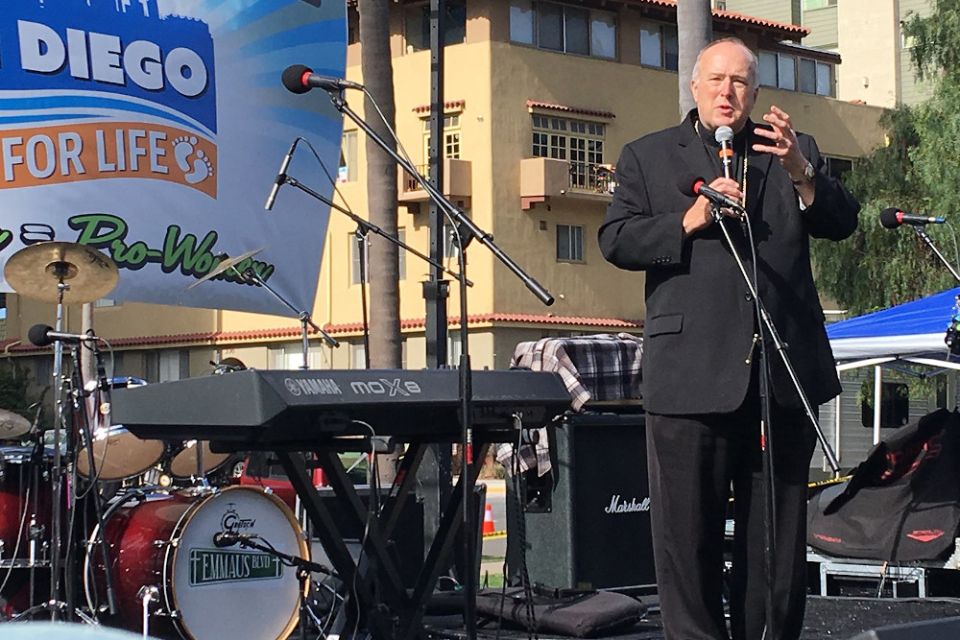 It is undoubtedly true that McElroy has been one of the U.S. bishops most attuned to Francis’ agenda. It is also true that Francis’ priorities and approach to many issues differs from that of his immediate predecessors. But, the framing Barber provides, and Rocca relates, is wrong. Cordileone may reflect some of the priorities of John Paul or Benedict, but so does McElroy. All three popes evidenced concern to challenge politicians — and others — on abortion.

This pitting one pope against another is understandable, but it can also become facile. As is the case with non-ecclesial matters, that facileness often derives from ideological blinders and, in this case, a certain American myopia.

On issues of Catholic social teaching, there have been obvious differences between the popes. John Paul wrote his three great social encyclicals as communism was crumbling, when the “End of History” was in the air. Benedict wrote his one social encyclical in the wake of the economic meltdown of 2008. Francis, the first pope from the global South, is also the first from a country that experienced a sovereign debt crisis. These experiences undoubtedly shaped their approaches to Catholic social doctrine, but what stands out are the obvious points of continuity: The developing of solidarity as a central theme, a non-dualistic approach to issues of Christian anthropology rooted in Gaudium et spes #22, a recognition that the market posed dangers as well as solutions, not just to public morals but to human dignity.

It is true that Francis represents a clear break from the social teaching of John Paul if you relied on George Weigel to interpret that teaching. Weigel’s distortions of John Paul’s teaching was a central theme of Massimo Borghesi’s book Catholic Discordance: Neoconservatism vs. the Field Hospital Church of Pope Francis, which I reviewed in two parts here and here.

I bring up Weigel for a specific reason: He just published a version of the same meme Barber was expressing, about the enormous discontinuity between the papacies of John Paul, Benedict and Francis. In an otherwise reasonably insightful article that dispels many myths about conclaves, Weigel observed: “In 2013, the overwhelming majority of electors had been created cardinals by John Paul II and Benedict XVI. The man they chose, who took the unprecedented papal name Francis, has quietly but determinedly dismantled the legacy of John Paul II and Benedict XVI in numerous respects.” Dismantled?

This pitting one pope against another is understandable, but it can also become facile.

Again, there are obvious points of difference. Take synodality. John Paul had no time for it, and famously read books during the proceedings of synods of bishops. Benedict tried to interject more of a dialogical character into the synods by having a karaoke hour at the end of each day, during which any synod father could go to the microphone and say whatever was on their mind. Francis has determinedly tried to introduce synodality into the life of the church in more profound ways, but that is not the same thing as dismantling a legacy.

You could list a range of issues on which Francis builds on, redirects, amplifies and enlarges, or reinvigorates various parts of the legacy of his predecessors. Only on the issue of John Paul’s unwillingness to confront the scourge of clergy sex abuse do we see a real break between pontificates. It is inconceivable that John Paul would have demanded the resignation of an entire episcopate over its mishandling of clergy sex abuse, as Francis did with the Chilean bishops. Surely, by now, even Weigel can admit that John Paul’s legacy on that issue is worth dismantling.

Successive pontificates, especially those in the years after an ecumenical council, are like the petals on a flower, gradually unfolding the full bloom, one petal at a time, each petal different, all connected at their base to the stem. John Paul made important, sometimes controversial, decisions regarding the reception of the Second Vatican Council, and we can all debate and discuss which decisions were wise and which were wrong-headed. I am especially grateful to the already mentioned emphasis he placed on Gaudium et spes #22. Benedict’s restoring grace and gratitude to a foundational place in Catholic anthropology and, consequently, Catholic social teaching, will always be something to commend. And Francis has taken the rich theological and ecclesial insights of the post-conciliar church in Latin America and brought them to the universal church.

Instead of trying to set bishops against each other today by viewing them as partisans of different pontificates, U.S. commentators and prelates are well-advised to escape the myopia of the culture wars that have infected the church in this country. The achievement of genuine unity and affective collegiality among the bishops will only come when they recognize that there is no unity in the Catholic Church apart from Peter and his successors, and there is only one pope at a time.

Share on FacebookShare on TwitterShare on PinterestShare on EmailShare on LinkedIn
Pope accepts Bishop Van Looy's request not to be made a cardinalCOMECE to European Council: Renew efforts for peace in Ukraine