Home Test page Confined to choose: A review of Journey to Freedom

Confined to choose: A review of Journey to Freedom

The Russian soul is singularly situated toward an authentic understanding of freedom. Dostoevsky, Berdyaev, Solzhenitsyn and, most recently, Sergei Ovsiannikov, all endured the crucible of confinement. It was here—and not in the decadent pleasures of the West—that they found true freedom. This is not the existential absence of slavery or incarceration. Rather, it is the acknowledgement of our metaphysical origin and destination. And, as Osviannikov never tires of repeating, it is the journey of our lives. 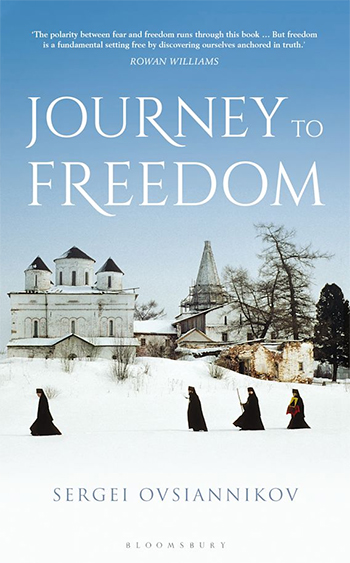 As a soldier in the Soviet Army, Osviannikov was jailed for disobedience and spent a good bit of time in solitary confinement. Surrounded by stench in a windowless cell, he encountered both fear and freedom. A polarity, Rowan Williams tells us in the Foreword, that “runs through the whole book.” It also runs through Osviannikov’s life from the cold confines of Communist Russia to the debauched streets of Amsterdam.

Following his stint as a soldier and prisoner, he answered the call of the Russian Orthodox priesthood. Serving first in London under Metropolitan Anthony of Surozh and ultimately in Amsterdam, Father Sergei spent the balance of his life preaching on the true nature of freedom. So much so, in fact, a parishioner once pointed it out and Father Sergei decided to collect his thoughts in the form of a book. He did not live to see it translated in English and published for Western readers, but it will not diminish its impact. Our age—threatened by totalitarianisms soft and structural and a concomitant rise in lawlessness—is ever in need of his message.

It is a message unsurprisingly rooted in Christianity. It was in jail that he experienced the fear that replaces freedom but also discovered freedom’s rebirth in God. Death, he writes, is “perhaps the chief consequence of the loss of freedom. And so it follows that the path to freedom is the path towards resurrection from the dead.”

How do we travel this path? Father Sergei offers the simplest of answers. “It is to become a slave.” We are to take the yoke of Christ upon us and be freed of our burdens. It is a message with special resonance for the West. “If the free man’s problem is responsibility for his own life, the simplest thing to do is hand over that responsibility to another, a master, and accept the condition of a slave.” For those that scoff at such a suggestion, it is worth noting that it is human nature to be in thrall to something or someone; addiction, money, ideologies, and political leaders fill the void for many that refuse the invitation of Christ. It is, as he wonderfully illuminates it, the genetic heritage of our Hebraic roots; Joshua and Caleb possessed “a spirit turned toward freedom” while others sought a return to Egypt.

It is paradoxical—but no less true—that God offers us His yoke that we might be authentically free. Thus do commandments guarantee our freedom rather than restrict it. “The notion that God does not need slaves,” Father Sergei says, “that was the discovery Moses made.” But, he cautions, we must dispense with fear. It is fear that “turns any freedom into paralysis.” And fear deprives our souls of joy, a joy that remains proper to Man even after our Edenic banishment.

At times Father Sergei reads like the fathers of the Philokalia, offering a word with mystical weight and practical use. Elsewhere, especially when writing about silence, Father Sergei’s style is reminiscent of the lyrical aphorisms of philosopher Max Picard. But it is in his discussion of the passions that he shows himself a modern descendant of the Desert Fathers. Distinguishing between “natural passions” and “passions of depravity,” Father Sergei preaches the asceticism of the desert.

“Asceticism,” he writes, “looks at man without condemnation and compulsion, but with a knowledge of his strong and weak sides. Asceticism teaches how to find beauty in man, and freedom.” The passions “suppress creativity and steal joy.” If we nurture “the ascetic within,” we will shed what is of little or no value and “keep hold of joy.” Little wonder that in our passionate age pleasures abound but joy is scarce.

We will never be free or joyful unless or until we accept the invitation of our Creator. “The Encounter,” he says, “that is what makes the beginning of freedom, makes it visible and effective.” It requires attention, something he also shared with the world. At his funeral, his son Aleksey eulogized him, saying:

One of the biggest gifts Father Sergei had was giving attention, attention that consisted of love and admiration. He was able to give full attention to that very moment he was living in whether he was reading, speaking or praying, giving his attention to every word and letter. Maybe even more importantly, he was able to let the silence sound in between the words.

It was my experience in reading this book that attention is amply rewarded and Father Sergei is a worthy guide.

Share on FacebookShare on TwitterShare on PinterestShare on EmailShare on LinkedIn
Review: The research behind our intimate relationships with GodSympathizers in Nigeria’s high-ranking positions stall fight against militants, priest says