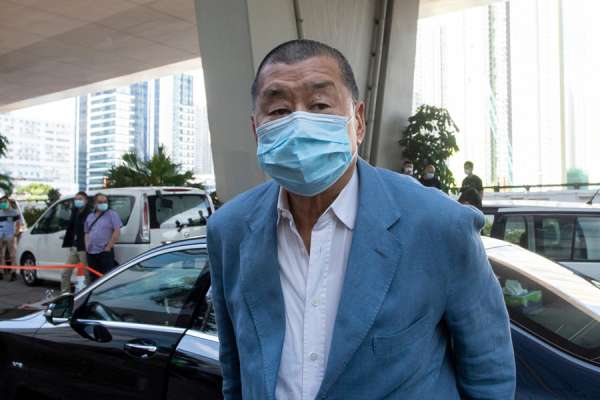 Washington, D.C. Newsroom, Dec 10, 2020 / 11:00 am (CNA).- Cardinal Joseph Zen Ze-kiun has warned that the recent arrest of Jimmy Lai shows a rise in “political intimidation” against journalists in Hong Kong, part of a systematic erosion of basic freedoms, including religious freedom, by the Chinese government in recent months.

In an interview with CNA, the emeritus Bishop of Hong Kong said that the arrest of Jimmy Lai, a Catholic, pro-democracy advocate, and the founder of the Hong Kong newspaper Apple Daily, was just the most recent example of Communist authorities attempting to stifle a free press.

Lai was charged Dec 2. with breaching the terms of a lease by his company Next Digital Media. Lai has previously been arrested and bailed under the terms of the new Hong Kong National Security Law, imposed on the territory in July, for pro-democracy advocacy.

Last week, Lai, along with two Next Digital executives, was arrested for allegedly breaching the terms of Next Digital’s land lease at its head office building. The two executives were released the following day but Lai was denied bail.

“It’s obviously a case of political intimidation,” Cardinal Zen told CNA, explaining that Lai’s treatment by local authorities was a public warning to others.

“Jimmy Lai is obviously the one who runs the only newspaper which is still completely free. You know many other papers are bought by people on the side of government, there may still be some respectable reporters working for them but at the right moment they can suppress everything,” said Zen.

“So, there is a clear policy direction: suppress the freedom of expression.”

In Hong Kong, the diocese Zen led until 2009, the mainland government has imposed a sweeping new National Security Law, which criminalizes previously protected civil liberties under the headings of “sedition” and “foreign collusion.”

Before the law’s implementation, many Catholics, including Zen, warned that it could be used to silence the Church in Hong Kong, though the law was defended by Cardinal John Tong Hon, Zen’s successor in the diocese, who is currently serving as apostolic administrator.

“It was not even a criminal case,” said Zen of the recent re-arrest of Lai, but “they arrested Jimmy Lai and transferred the case to the hands of the National Security Department, which meant that the case has been classified to be much more serious. “

The cardinal called the decision to deny Lai bail “ridiculous.”

“Jimmy has been charged with many other criminal offenses [related to his pro-democracy activism] and still the bails were granted for these cases, but now for such trivial thing he is not even allowed bail?”

“This is evidently all about political persecution,” Zen told CNA, explaining that, since the National Security Law came into force on July 1, authorities in Hong Kong had launched a systematic crackdown on civil liberties.

“It seems that now they are attacking the resistance mainly on three fronts,” said Zen.

“One is the court, they are intimidating the judges now; the second, as I said during the previous interview [with CNA], is the education; the third one is the press, many cases so far go against the free press.”

In November, three pro-democracy activists, including Catholic university student Agnes Chow, pled guilty on charges related to their roles in an “illegal assembly” in 2019. Last week, they were each sentenced to months in prison, with the possibility that they will face further charges.

Cardinal Zen told CNA that attacks on basic freedoms in Hong Kong extended beyond political repression and represented a growing threat to the Church.

“I have often said that there would not be any religious freedom when there is no freedom,” Cardinal Zen told CNA this week.

“So, with this National Security Law, the leader of our diocese has been forced to declare his position, and unfortunately we can tell that our diocese is very obedient to these new instructions on both the preaching of the priests and the teaching in our schools.”

“The authorities of our diocese make every effort to comply with the government’s new instructions,” said Zen.

In recent months, the Diocese of Hong Kong has issued directives to Catholic schools on “fostering the correct values on national identity” and respecting Chinese national symbols including the flag and national anthem. It has also blocked a Catholic pro-democracy ad campaign and prayer that was set to run in local newspapers.

In September, Cardinal Tong wrote the priests of the diocese, warning them against addressing political issues in their homilies or instigating “social disorder.”

Cardinal Zen called the measures “very sad,” adding that “we can no more freely announce the gospel values” in Hong Kong, and said that “obviously” diocesan leaders had been told to comply with the government “by Vatican authorities.”

Zen has been an outspoken critic of the Holy See’s accord with the Chinese government, first agreed in 2018 and recently renewed for another two years.

Many of the leaders of the pro-democracy movement in Hong Kong, including Jimmy Lai and Agnes Chow, are Catholics. Zen explained to CNA that, in past decades, the Church has had a key role to play in promoting the values of human dignity and freedom in Hong Kong – a role that is now being steadily eroded.

“It is true that the many years of education work of the churches in Hong Kong helped to shape and develop people to be more conscious of the duty to choose the right and to do the right,” he told CNA.

“This is more evident on those who grew up during the 1950s to 70s, they finished their secondary school, they continued their studies in universities here in Hong Kong or overseas, they were on the frontlines especially during the years after the 1997 handover [of Hong Kong from Britain to China].”

In recent years, Zen said, the erosion of human formation independent of the state since the handover had taken a toll.

“When the students came out in the [pro-democracy] movement, I’m sorry to say that not that many Catholics could I count among them.”

“The education in Christian schools, both Catholic and Protestant, surely can cultivate and empower students with important values which can explain the courage to stand up against the attempt of the government to enslave our citizens,” Zen said.

But, Zen told CNA, political struggles for basic freedoms have a “spiritual dimension” and, even under the heavy restrictions, it is vital that the Church offers signs of hope and example.

Recently, Zen led a Eucharistic benediction of the city of Hong Kong from the top of a double decker bus.

“We had a powerful, but in a form very simple, Eucharistic benediction of the city,” said Zen, telling CNA that while Catholics understood the spiritual power of such actions, atheistic authorities were less likely to pay attention.

“In [the] present situation where there are so many threats to the freedom of speech and everyone tries not to talk too much, some purely spiritual actions like prayers or Eucharistic benediction on the open top bus may not get on their nerves,” he said. “They would not mind and not even care because they don’t believe in such spiritual thing, but we believe.”

“So with all those restrictions imposed due to the pandemic, we can still do something like that,” said Zen, insisting that prayer was an essential part of aid to the Church in Hong Kong from Catholics around the world.

“We believe in the prayers, our private prayers in our religious communities, and we rely on the prayers of those who care about what’s going on in Hong Kong, as we really feel that we are at the bottom of the pit now,” he said.

“God must be with us and will make His way.”