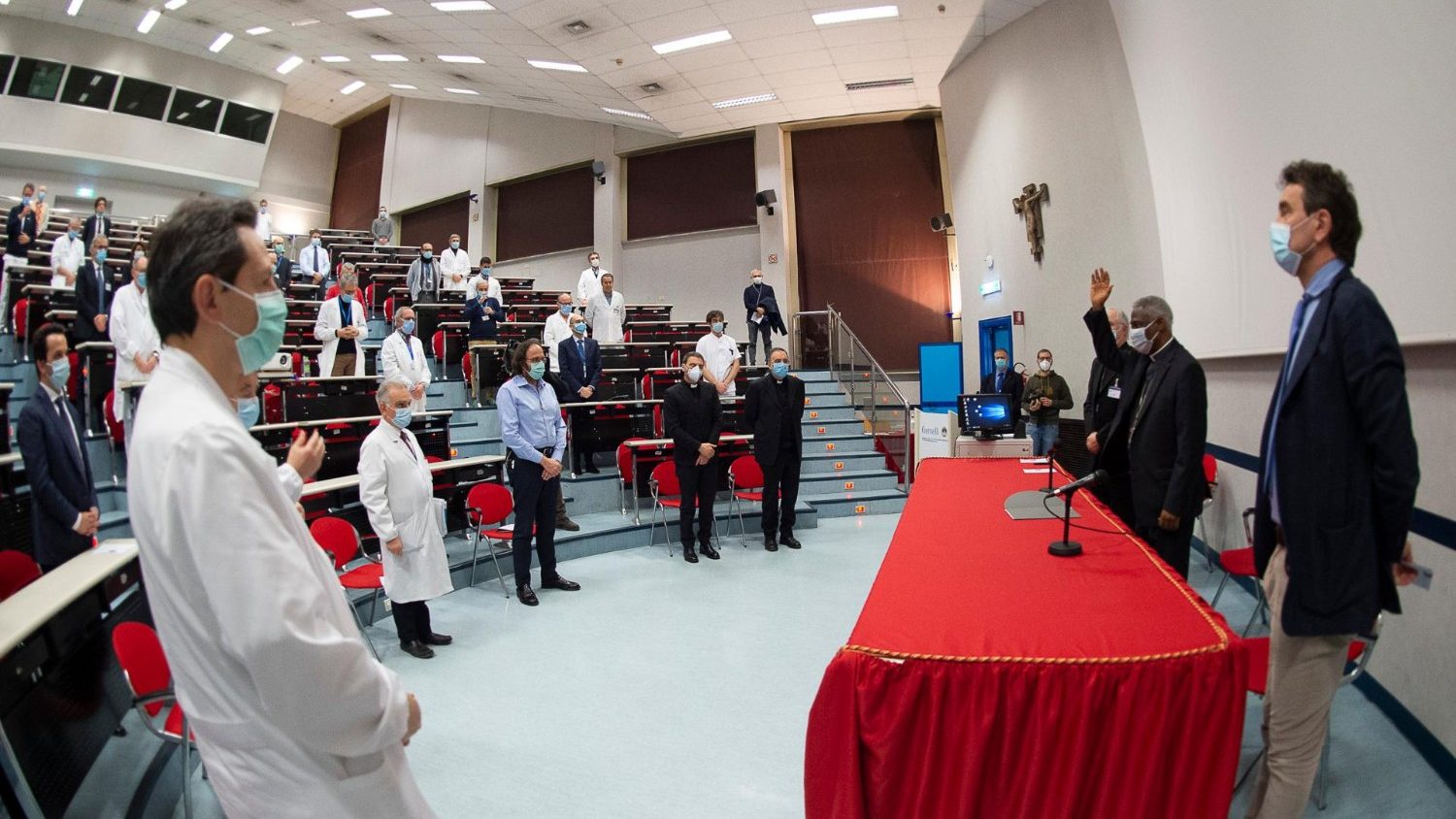 On Friday afternoon, Cardinal Peter Turkson, Prefect of the Dicastery for the Promotion of Integral Human Development, paid a visit to Rome’s Agostino Gemelli Hospital. The Dicastery announced the visit via a press release shortly after his visit.

Accompanying him were the Under-Secretary of the Dicastery, Msgr. Segundo Tejado Muñoz and Fr Nicola Riccardi. They met with the medical personnel who are dedicated to caring for coronavirus patients. In addition, they brought the greetings of Pope Francis himself to “all those sick with the virus, their families, and to the priests who exercise their pastoral ministry within the hospital”. Cardinal Turkson’s message was:

“I bring you the embrace of the Pope. You are not along in the fight against the Coronavirus!”

The visit concluded with the presentation of Rosaries blessed by Pope Francis and the assurance of “the prayer and support of the Church in this difficult moment of the fight against the pandemic, as well as physicial and spiritual difficulties”.

Praise for the Hospital

In an interview conducted by Vatican News after the visit, the Cardinal praised the hospital’s staff and administration. He noted that their good practice of separating the personnel working closely with coronavirus victims was a sign of their preparedness.

Citing the example of St. Charles Borromeo, who also lived during a pandemic, the Cardinal noted that healthcare workers are doing the work of martyrs.

Cardinal Turkson indicated that Pope Francis is preparing a gift of 30 to 50 respirators to assist the Agustino Gemelli Hospital in its important task of saving lives.

The Cardinal said that he finds hope for the world in “learning to be fraternal and learning to live in solidarity.”

He also noted that sharing knowledge is key to the fight against the virus. He gave the example of the medical personnel at the Polyclinic who meet daily to share knowledge about dealing with the virus.

The Cardinal stressed the importance of: “education, sharing knowledge, working in solidarity, working together, and considering the whole world now in this situation of the pandemic as one family – all of us being members and being brothers and sisters, and learning to support each from the resources of our knowledge.”

Listen to the interview with Cardinal Peter Turkson