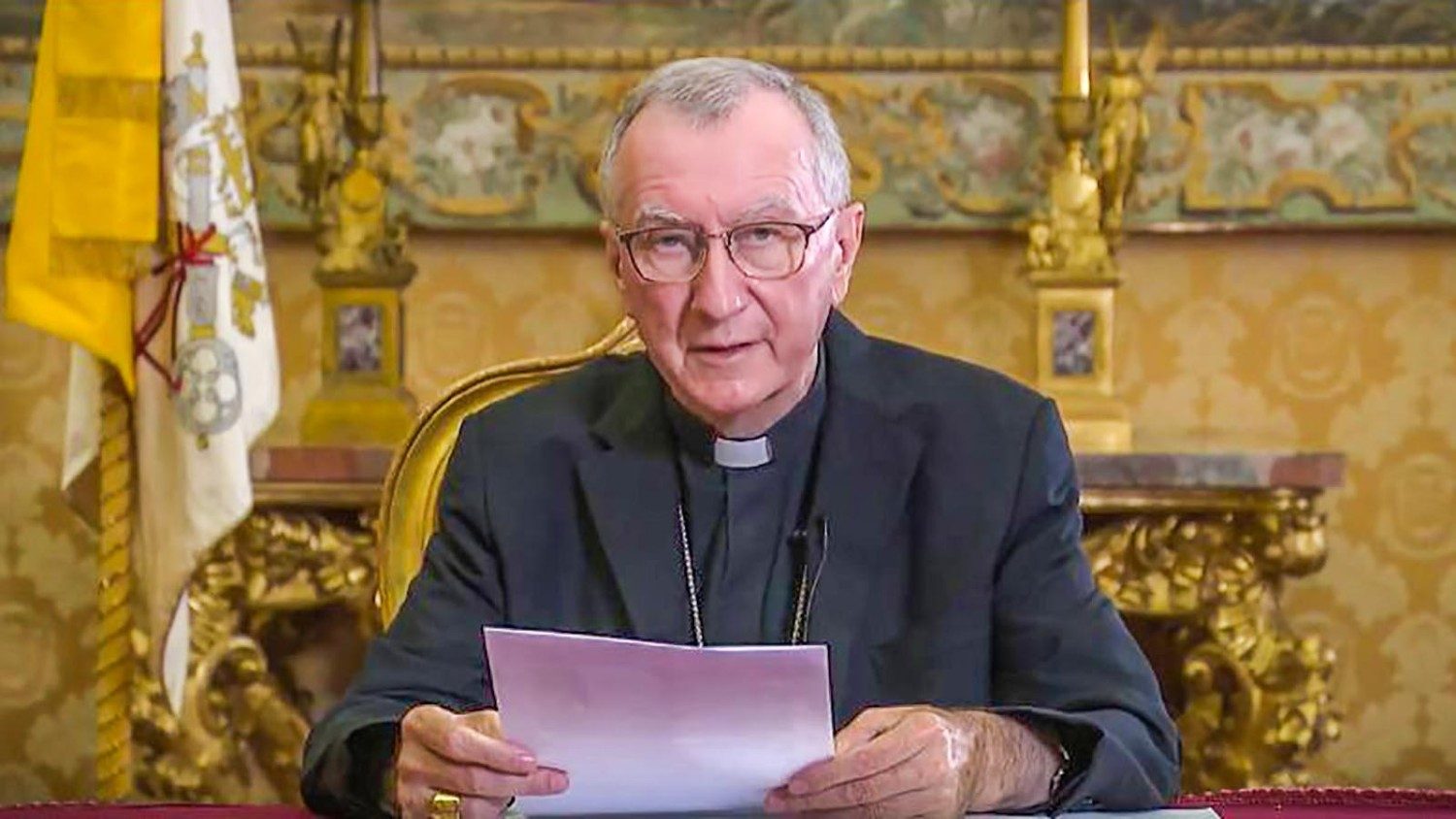 Cardinal Pietro Parolin gave a discourse on Thursday, focusing on important themes in Pope Francis’s latest Encyclical, Fratelli tutti, in order to reflect on the impact that the crisis generated by the outbreak of the Covid-19 pandemic is having on the international community and the entire human family.

The high-level online event on “Fraternity, Multilateralism and Peace” was divided into two panels. The first, dedicated to the importance of multilateralism, saw Cardinal Parolin and UN officials reflect on this important theme. The second panel, opened by a discourse from the President of the Pontifical Council for Interreligious Dialogue, Cardinal Miguel Ayuso Guixot, analyzed how interreligious dialogue can contribute to promoting a culture of social justice, dialogue and peace on the path toward human fraternity.

The virtual meeting was organized by the Permanent Mission of the Holy See to the United Nations and promoted by the Mission of the Order of Malta to the UN in Geneva, with the collaboration of the International Catholic Migration Commission, the Forum of Catholic NGOs, the Caritas in Veritate Foundation, as well as the Pontifical Lateran University.

In his discourse, Cardinal Parolin highlighted that to fully understand the concept of fraternity and its place in the Holy See’s multilateral diplomatic action, it is important to recall that fraternity was the first theme Pope Francis referred to on the day of his election as Pope, eight years ago. On that day in fact, Pope Francis said: “Let us always pray for one another. Let us pray for the whole world, that there may be a great spirit of fraternity.”

“All the subsequent actions and activities of the Pontificate have been a natural and coherent consequence of a path oriented towards it,” Cardinal Parolin said.

Re-echoing Pope Francis’ 2017 message to the President of the Pontifical Academy of Social Sciences, Cardinal Parolin noted that “while solidarity is the principle of social planning that allows the unequal to become equal; fraternity is what allows the equal to be different people. Fraternity allows people who are equal in their essence, dignity, freedom, and their fundamental rights to participate differently in the common good according to their abilities, their life plan, their vocation, their work, or their charism of service.”

In the same regard, continued the Cardinal, fraternity, when applied to multilateral action, translates into “the courage and generosity to freely establish certain common goals and to ensure their fulfilment of certain essential norms throughout the world” while maintaining faith with legitimately manifested will and resolving disputes through means offered by diplomacy, to achieve “a truly universal common good and the protection of weaker states.”

Therefore, in the present time – one year after the start of the pandemic – fraternity is important to help overcome the current dichotomy between the “code of efficiency” and the “code of solidarity”, as it pushes the world towards “an even more demanding and inclusive code,” Cardinal Parolin stressed.

In line with efforts towards achieving fraternity, Cardinal Parolin went on to propose some reflections on access to healthcare, refugees, work, international humanitarian law and disarmament.

As regards healthcare, the Vatican Secretary of State highlighted the “indissoluble bond” experienced around the world in the past year due to the pandemic, which has aroused the awareness that we are in the same boat and that the suffering of one affects all. He however lamented that this bond has given way to a race for vaccines and treatments at national levels, further making evident the gap in access to healthcare between developed countries and the rest of the world.

On this issue, Cardinal Parolin noted that the Holy See has issued a set of guidelines, inspired by a conviction of the importance of fraternity. Also from this perspective, the Cardinal emphasized that “the international community has an obligation to ensure that any Covid-19 vaccine and treatment is safe, available, accessible and affordable to all who need it.”

“Attention to the neediest and those in vulnerable situations, especially refugees, migrants and internally displaced persons, is not only a testimony of fraternity, but a recognition of a concern for the real needs of our sisters and brothers,” the Vatican Secretary of State affirmed.

Recalling Pope Francis’ incessant appeals to leaders and international organizations for a globalization of solidarity capable of supplanting indifference, he bemoaned the suffering of refugees which continues to be a “wound in the social fabric of the international community” even in the year that marks the 70th anniversary of the establishment of the United Nations High Commissioner for Refugees (UNHCR).

The Cardinal went on to reaffirm the Holy See’s support for the underlying vision of the Global Compact on Refugees which seeks to strengthen international cooperation through equitable sharing of responsibility for a sustainable solution to refugee situations.

Another group significantly impacted by global pandemic containment strategies is workers, including informal workers, small business owners and traders, “who have seen an erosion of their savings and have often faced systematic barriers to accessing basic health care,” Cardinal Parolin pointed out.

To respond to this, he proposed that the traditional format of social dialogue be expanded to include the involvement of workers’ and employers’ organizations, complemented by actors in the informal economy, as well as a consideration for environmental protection.

Citing Fratelli tutti, the Cardinal insisted that we need to think about “social, political and economic participation that can include popular movements and invigorate local, national and international governing structures with that torrent of moral energy that springs from including the excluded in the building of a common destiny.”

Cardinal Parolin went on to re-emphasize the importance of strengthening and promoting a respect for humanitarian law, stressing that it aims to safeguard the essential principles of humanity, protect civilians and ban the use of certain weapons in the context of war, which itself, is inhuman and dehumanizing.

He recalled that Henry Durant, the founder of the Red Cross, was inspired by a sense of fraternity when he convinced local populations and volunteers to provide aid to parties in conflict regardless of their affiliation. He added that in the same vein, the Geneva Conventions of 1949 represent an implicit recognition of the bond of fraternity that unites peoples, as well an acknowledgement of the need to set limits in conflicts.

In this regard, the Cardinal reiterated the Holy See’s hopes that States will achieve further development in humanitarian law “in order to take proper account of the characteristics of contemporary armed conflicts and the physical, moral and spiritual suffering that goes with them, with the aim of eliminating conflicts altogether.”

“The desire for peace, security and stability is in fact one of the deepest desires of the human heart, since it is rooted in the Creator, who makes all peoples members of the human family,” Cardinal Parolin said.

This aspiration, he insisted, cannot be satisfied by military means alone, and even less by the possession of nuclear weapons and weapons of mass destruction.

He further noted that “it is not rhetorical to say that war is the antithesis of fraternity as “conflicts always cause suffering” – in those who experience them, but also in those who fight in them.

Despite some encouraging signs, including the re-entry into force of the Treaty on the Prohibition of Nuclear Weapons, Cardinal Parolin laments the huge amounts allocated to armaments, pointing out that the disproportion between the material resources and human talents dedicated to the service of death and the resources dedicated to the service of life is a cause for scandal.

The Cardinal therefore seized the opportunity presented by the online event to reiterate the Holy See’s encouragement for efforts by States in the field of disarmament and arms control towards lasting peace and nuclear disarmament.

Concluding his discourse, the Vatican Secretary of State noted that it is not enough to proclaim commitment or encourage efforts in response to these great challenges, rather we are invited to respond concretely through individual responsibility and the capacity to share in a reciprocity of relationships through a spirit of fraternity that will help to overcome isolation. He added that that Pope Francis’ calls demand a presence and conduct that “responds to the actuality of relations between states and between peoples, especially when attitudes that abandon the vision of the common good seem to prevail.”

Share on FacebookShare on TwitterShare on PinterestShare on EmailShare on LinkedIn
Pope attends funeral Mass of former Papal Almoner‘The cathedral is saved’: Notre Dame two years after the devastating fire