Home Test page Cardinal Czerny: The Church is synodal in its very essence and life

Cardinal Czerny: The Church is synodal in its very essence and life 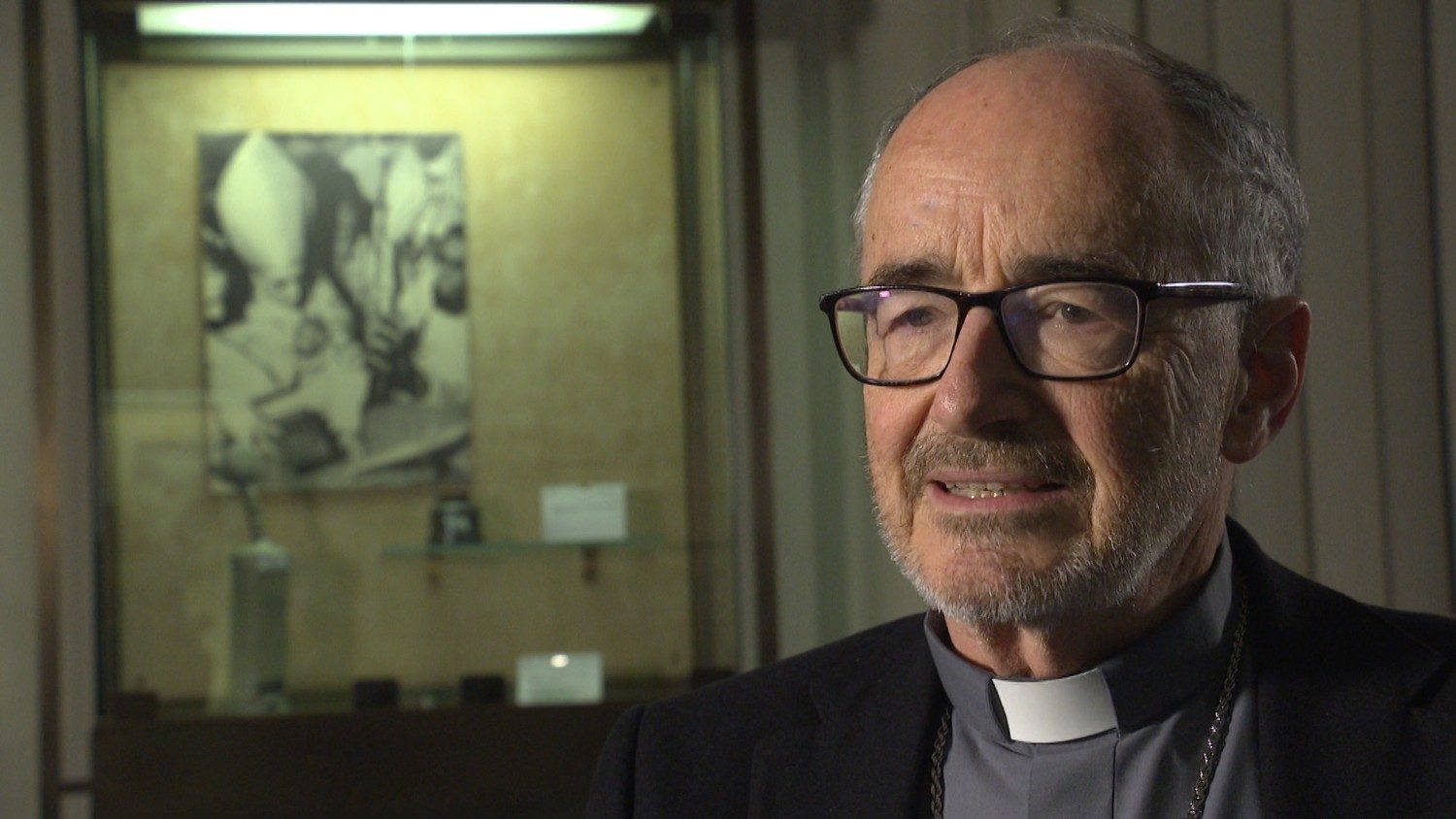 Cardinal Michael Czerny, the Under-Secretary for the Migrants and Refugees Section of the Vatican Dicastery for Promoting Integral Human Development, gave a speech on Thursday to participants at the 12th Fribourg Church in the World Forum, taking place from 14-15 October.

The forum, themed “Contextuality and synodality – The Synod on the Amazon and its aftermath,” is organized by the Institute for the Study of Religions and Interreligious Dialogue (IRD)and the Center for Comparative Pastoral Studies of the Faculty of Theology of the University of Fribourg in collaboration with MISSIO Switzerland.

Cardinal Czerny spoke on “The face of a ‘Franciscan’ Church after the Amazon Synod”.

A synod for the Amazon

The Cardinal said that Amazon synod which took place in Rome in October 2019, was many years in the making and addressed many issues. The process did not end with the closing ceremony or the final documents, he noted, adding that it continues “not only making the Amazon region new but, with God’s grace, renewing the whole Church.”

He explained that the word ‘synod’ comes from Greek roots that convey “a road walked with others, a shared way.” It is “a path followed by the Church in the light of the action of the Spirit in her history, at the service of the people of God” and is “the result of the insights and seeds that emerged as guidelines for the whole Church in the Second Vatican Council” especially in the constitutions Lumen Gentium, Gaudium et Spes and in the decree Ad Gentes.

The Amazon synod is “a beautiful path – better, a network of waterways – that we want to experience, analogically and mutatis mutandis, in other parts of the Church and the world” he said. And the Church has to prepare for a deeper appreciation of synodality thanks to the world-wide synodal process launched by Pope Francis on Sunday.

Cardinal Czerny traced the origins of the 2019 Amazon Synod from Vatican II and the 1968 CELAM Conference, to repeated expressions of alarm about the deteriorating state of the biome; and in a particular way, to the 2007 meeting of the bishops of Latin America in Aparecida.

He noted that the Aparecida document follows the pattern of seeing, judging and then acting, and offers a decisive unified pastoral plan: a program, proposals and orientations. Notable points in the document include the call to evangelize our peoples to discover the gift of creation so that they can learn to care for it; deepening pastoral presence among fragile populations; pursuing a comprehensive and communal alternative development model that overcomes the utilitarian and individualistic logic; redoubling efforts to promote government and citizen efforts for the protection of nature, creating consciousness of the importance of Amazonia for all mankind, and providing necessary resources for the Church in Amazonia to continue its pastoral work.

Cardinal Czerny then noted that a few months after Pope Francis was elected the Pontiff, he met with the Brazilian bishops and spoke about “Amazonia as a litmus test for the Church and Brazilian Society.” The Pope also urged everyone to reflect on what Aparecida said about Amazonia, calling for a respect for nature and the stewardship of creation. Following that, Pope Francis “laid out his program” in Evangelii gaudium (2013) in which he spoke of a “missionary option” – “a missionary impulse capable of transforming everything, so that the Church’s customs, ways of doing things, times and schedules, language and structures can be suitably channelled for the evangelization of today’s world rather than for her self-preservation.”

In 2015, Pope Francis published the Laudato sí Encyclical which applies the evangelizing logic of Evangelii gaudium to “questions of justice in debates on the environment, so as to hear both the cry of the earth and the cry of the poor” (LS 49). The Pope stresses that everything is interconnected and invites us to develop a spirituality of global solidarity that flows from the Trinity.

“Both the Amazon and our own territory are a locus theologicus, a theological topic for contemplation of sacred mystery as well as facing social, economic, environmental, political, and cultural issues,” Cardinal Czerny added.

The Amazon Synod ended with a final document that captured the deliberations during the synod. The synod also articulated four interconnected dimensions of conversion as the basis of new paths: Pastoral (requiring a spirit of listening); cultural (inculturated and intercultural, engaging and embracing the culture of the people); ecological/environmental (the socio-enviromental dimension of evangelization with a social approach to ecology); and synodal (going towards horizons of deeper communion and inclusive participation).

In 2020, Pope Francis formulated his post-synodal exhortation Querida Amazonia which he framed in terms of the social, cultural, ecological and ecclesial dreams.

“What the Holy Father has boldly suggested is a greater ecclesial sense that is opening horizons,” the Cardinal said. “It is quite striking that the dynamizing factor is not limited by our usual boundaries—my diocese, my state, my corner of the world—but rather it comes from this grander, more diverse, and more vulnerable Amazonia, which is ever more vital for the health of the world.”

The Cardinal then explained that in putting the Synod’s Final Document and Querida Amazonia into action, work began immediately, following the Holy Father’s words that “ecclesial structures must become incarnate.” One of the efforts in this regard was the creation of the Ecclesial Conference of the Amazan (CEAMA) which involves the participation of men and women religious, Caritas and the Pan-Amazon Church Network.

Also, 16 working groups were created to tackle the issues facing Amazonia, these include Intercultural bilingual education and a new Amazonian University; inculturation and the encounter of cultures in healthcare, pastoral care, and the new Amazonian Rite to be developed; new recognized ministries: of women, of the celebrant community, and of care for our Common Home; Amazonian peoples, traditional communities and the territory they are in (Territoriality); the Church on the borders or frontiers: itinerant, migrant and refugee populations.

Others are human rights and advocacy; youth and Amazonia; ecumenical and interreligious dialogue; women and Amazonia; missionary life and itinerant missions, on-going observation, research and mapping of the Amazon from both the pastoral and the socio-environmental viewpoints; regional and international networks; socio-environmental justice and buen vivir; spirituality and theology; pastoral formation and new pastoral methods and media for communication and transformation.

Cardinal Czerny continued tracing the Church’s path, noting that last year, amid the coronavirus pandemic, Pope Francis published Fratelli tutti on Fraternity and Social Friendship, warning us that “either we are brothers and sisters, or everything fails [and] we destroy each other. Brother- and sister-hood is the frontier on which we must build, the challenge of our century, the challenge of our times.”

In the 2020 Encyclical letter, explained the Cardinal, Pope Francis “responds with an even more radical call to shared responsibility as siblings. He elaborates on the culture of encounter, on dialogue and friendship in society, on political love, and on paths of renewed encounter that include reconciliation and forgiveness.”

Looking ahead to the October 2023 Synod on the theme, “for a synodal Church: communion, participation and mission”, Cardinal Czerny points out that it is the opportunity to “to pull the previous steps together into an ongoing process, turning the word ‘Church’ into verbs: encountering, repairing, functioning, serving, praying.”

“Synodality refers to the very essence of the Church, her constitutive reality, and is thus oriented towards evangelization. It is an ecclesial way of being and a prophetic way of serving today’s world,” he explained, adding that Pope Francis’ vision for the Church is “not like a landscape, much less a portrait; rather it is more like unfolding and converging paths.”

The Cardinal concluded his speech with some questions to inspire discussions concerning the challenges ahead, inspired by the realization that “the Church is synodal in its very essence and life” and “the synodal path does not end, as the experience in the Amazon vividly shows.”

The Church exists in many shapes and forms, from the family to the local parish, through to the diocese, associations, movements and organizations, the bishops’ conferences and the See of Peter, he said. “All of them need processes of listening, cooperation and synergy” so that “regulated by humility and docility to the Holy Spirit, they might confidently aspire to a felicitous discernment of paths ahead and shared implementation so that everyone participates in the Synodal path.”