Home Test page Bishop McElroy: The Eucharist is being weaponized for political ends. This must not happen.

Bishop McElroy: The Eucharist is being weaponized for political ends. This must not happen. 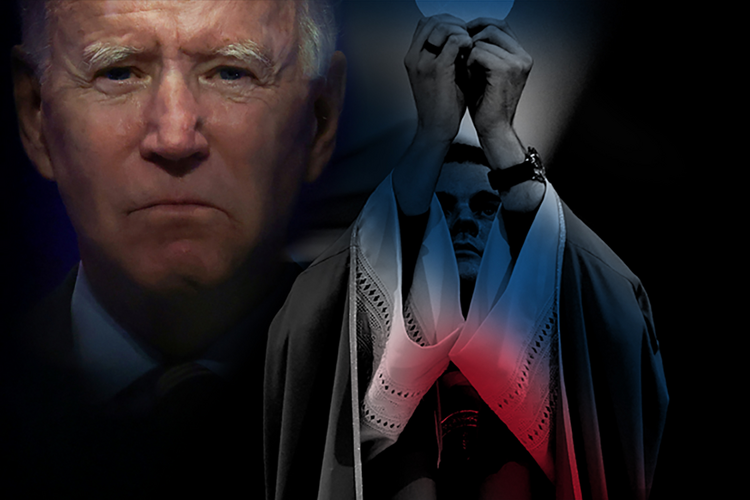 Editor’s note: This article is part of The Conversation, a new initiative of America Media offering diverse perspectives on important and contested issues in the life of the church. Read another view on the reception of the Eucharist here and here.

In the six months since the 2020 election, a growing movement has emerged in the church in the United States that calls upon the bishops of our nation to publicly exclude President Joseph R. Biden and other Catholic public officials from the Eucharist. Those who support this action make a concise, three-part argument: The president supports positions on abortion that clearly depart from the teaching of the church on an extremely grave moral issue; the long tradition of the church requires personal worthiness to receive the Eucharist; and the persistent rejection of clear Catholic teaching extinguishes that worthiness.

It is understandable how numerous Catholic leaders have come to this moment. It is almost 50 years since the Supreme Court decision in the case Roe v. Wade. While progress in reducing abortions has occurred in some jurisdictions and the number of abortions nationwide has fallen, the United States still rejects the legal structures and policies that can bring meaningful protection to the unborn. The election of President Biden and a Democratic Congress is a sign that, outside of the courts, federal progress on the pivotal moral issue of abortion will not occur in the immediate future. This is an immense sadness for every bishop in our country and for the church as a whole, and leaders of the church are ardently seeking a step that will advance the protection of the unborn.

The proposal to exclude pro-choice Catholic political leaders from the Eucharist will bring tremendously destructive consequences.

The Catechism of the Catholic Church teaches: “The Eucharist is the efficacious sign and sublime cause of that communion in the divine life and that unity of the People of God by which the Church is kept in being. It is the culmination both of God’s action sanctifying the world in Christ and the worship men offer to Christ and through him to the Father in the Holy Spirit.” Because of this sacred nature and identity, the Eucharist must never be instrumentalized for a political end, no matter how important. But that is precisely what is being done in the effort to exclude Catholic political leaders who oppose the church’s teaching on abortion and civil law. The Eucharist is being weaponized and deployed as a tool in political warfare. This must not happen.

The substantial damage that will take place within the eucharistic community as a result of this instrumentalization will be broad and deep. “Lumen Gentium” proclaims:

At the Last Supper, on the night he was betrayed, our Savior instituted the Eucharistic sacrifice of his Body and Blood. This he did in order to perpetuate the sacrifice of the cross throughout the ages until he should come again, and so to entrust to his beloved Spouse, the Church, a memorial of his death and resurrection: a sacrament of love, a sign of unity, a bond of charity, a Paschal banquet.

A national policy of excluding pro-choice political leaders from the Eucharist will constitute an assault on that unity, on that charity. Fully half the Catholics in the United States will see this action as partisan in nature, and it will bring the terrible partisan divisions that have plagued our nation into the very act of worship that is intended by God to cause and signify our oneness.

A Theology of Unworthiness

Advocates for the proposal to adopt a national policy of excluding pro-choice political leaders from the Eucharist need a rationale to support this unprecedented action. They have proposed that it lies in the theology of worthiness to receive the Eucharist that has existed since the early life of the church. Rooted in the exhortation of St. Paul not to eat or drink unworthily at the table of the Lord, the traditional theology of eucharistic worthiness is simultaneously an exhortation, a recognition of human weakness and a discipline. This traditional theology is an exhortation because it reminds us that the Eucharist constitutes the reception of the Lord himself, and thus all believers approaching the altar should in reverence attempt to conform their lives more fully to the person of Jesus Christ. Second, the traditional theology of worthiness incorporates into its presentation of the Eucharist the recognition that human failing is deep and broad and that the grace and mercy of God abound. Finally, the theology of worthiness in the church teaches that Catholics conscious of grave sin should receive forgiveness in the sacrament of penance before receiving the Eucharist.

The particular theology of worthiness that proponents for a national policy of eucharistic exclusion have advanced dramatically de-emphasizes the first two elements of the traditional theology and focuses on the third element: discipline. Thus it would best be labeled “a theology of unworthiness.”

The first is the extremely expansive notion of what triggers unworthiness to receive the Eucharist: Any Catholic who continually rejects a significant teaching of the church is automatically unworthy to receive the Eucharist. Advocates propose that because President Biden rejects the moral obligation to seek laws protecting the unborn, he should be excluded from the Eucharist. For worthiness requires integral union with all of the major teachings of Catholic faith.

It is the moral obligation of Catholics to embrace all the teachings of the church in their entirety. But failure in fulfilling that obligation in its fullness cannot be the measure of eucharistic worthiness in a church of sinners.

How many Catholic political leaders of either party could pass that test? And because any notion of eucharistic unworthiness in the theology of the church must apply not just to political leaders but to all Catholics, how many of the faithful will be eligible for the Eucharist by this criterion? It is the moral obligation of Catholics to embrace all the teachings of the church in their entirety. But failure in fulfilling that obligation in its fullness cannot be the measure of eucharistic worthiness in a church of sinners and questioners, who must face intense pressures and complexities in their daily lives.

A second problematic dimension of this theology of unworthiness is that while it is expansive in its notion of unworthiness, it applies sanctions very selectively and inconsistently. Proposals to exclude pro-choice Catholic political leaders from the Eucharist have focused on abortion, and at times euthanasia, as the imperative issues for which the bishops should adopt a national policy of eucharistic exclusion. Their logic is that abortion and euthanasia are particularly grave evils, they are intrinsically evil and they involve threats to human life.

But why hasn’t racism been included in the call for eucharistic sanctions against political leaders? Racism was enumerated as a compelling intrinsic evil by St. John Paul II in “Veritatis Splendor” and by the Second Vatican Council. Our own conference of bishops has proclaimed that “racism is not merely one sin among many; it is a radical evil that divides the human family and denies the new creation of a redeemed world.” As to whether racism is a sin that threatens human life, anyone with doubts should talk with the families of George Floyd, Breonna Taylor and Trayvon Martin.

The U.S. Conference of Catholic Bishops will be dealing a great blow to that integral unity if it passes a national policy of eucharistic exclusion aimed at abortion but not at racism.

Racism is tearing at the heart of our nation with intense fury at this very moment, yet the intrinsic evil of racism is not a grounds for eucharistic exclusion in the proposals that have been brought this year to our conference of bishops for action. It will be impossible to convince large numbers of Catholics in our nation that this omission does not spring from a desire to limit the impact of exclusion to Democratic public leaders and a desire to avoid detracting from the focus on abortion.

Cardinal Joseph Ratzinger, in his “Doctrinal Note on Some Questions Regarding the Participation of Catholics in Political Life,” warned bishops against just such a pathway. “The Christian faith is an integral unity, and thus it is incoherent to isolate some particular element to the detriment of the whole of Catholic doctrine.” The U.S. Conference of Catholic Bishops will be dealing a great blow to that integral unity if it passes a national policy of eucharistic exclusion aimed at abortion but not at racism.

Christ’s Invitation in the Eucharist

The traditional Catholic teaching on worthiness for reception of the Eucharist is an important one in the life of the church. But it is not the centerpiece of the church’s understanding of Christ’s invitation to receive the Eucharist. As Pope Francis made so clear in “Evangelii Gaudium,” the Eucharist is “not a prize for the perfect but a powerful medicine and nourishment for the weak” (No. 47). The newly emerging American theology of unworthiness is a direct challenge to this teaching and poses great dangers to Catholic faith, spirituality and practice. It constitutes a significant departure from the emphases of the Second Vatican Council.

Is the central identity of the invitation of Christ to the Eucharist a sign of personal worthiness or the graced call of the God of mercy?

In the decision that the conference of bishops must face in the coming months lies a monumental choice: Is the central identity of the invitation of Christ to the Eucharist a sign of personal worthiness or the graced call of the God of mercy? At a time when we are emerging from a pandemic and seeking to rebuild the eucharistic community, it would be particularly wounding to embrace and emphasize a theology of unworthiness and exclusion rather than a theology that emphasizes Christ’s unrelenting invitation to all. And it would undermine the tremendous work that our priests and lay leaders are doing in emphasizing the importance of every Catholic returning to full and active participation in the liturgy of God.

More from America on the question of reception of Holy Communion: