Editor’s note: The following is an exclusive excerpt of the Prologue to Joseph Pearce’s forthcoming book, Benedict  `: Defender of the Faith.

Like most people, or at least like most Catholics, I remember exactly where I was on April 2, 2005, the day on which John Paul II died. Minutes after hearing the doom-laden news, I gathered together with Father Joseph Fessio and a small group of students on the campus of Ave Maria University in Florida, in the open air, to pray for the pope. I don’t remember the actual prayers that were said but I do recall that we sang the Salve Regina, beseeching the intercession of the Blessed Virgin for the pope and for the Church. 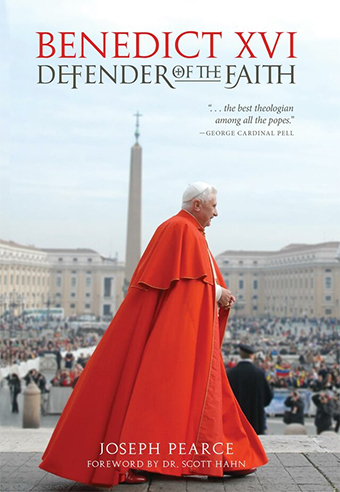 Even as we grieved for the passing of one pope, our minds and prayers were already turning to thoughts of the next. The Church was under siege from her secularist enemies from without and was being betrayed by the modernist fifth columnists from within. She was in need of a strong and faithful shepherd to protect the flock from the wolves outside her walls, baying for her blood, and the wolves in sheep’s clothing within her own ranks, betraying her with a kiss. Even though we knew that Christ would protect His Bride, it was difficult to avoid feelings of anxiety as we awaited the election of John Paul’s, and Peter’s, successor.

Like most Catholics, I also remember where I was on April 19, 2005, the day on which Pope Benedict XVI was elected. I was once again on the campus of Ave Maria University and, in union with Catholics around the world, was waiting with bated breath for news from the conclave. As the chapel bell of the university began to chime, I knew that the wait was over. White smoke must have risen from the chimney above the Vatican. We had a new pope! I rushed to the cafeteria where a large group of students and faculty had already gathered, crowding around the TV screen. Hope and anxiety filled the room. The wait seemed interminable, the tension unbearable, the silence deafening. Highly charged emotions were held in check by the absence of knowledge; a vortex in a vacuum. The doors opened. Another excruciating wait before anyone emerged. Eventually Cardinal Jorge Medina Estévez made the long awaited announcement in Latin: Annuntio vobis gaudium magnum: HABEMUS PAPAM! As the name of Joseph Ratzinger was proclaimed as the new Vicar of Christ, all heaven broke loose! Everyone in the room erupted in sheer joy and jubilation, cheering and dancing. I found myself doing an impromptu jig with the Dean, leaping around in each other’s arms in a most indecorous manner! Father Fessio broke down with uncontrollable tears of joy. A former student of Ratzinger’s and a longtime champion of the Cardinal’s work, Fessio, as the founder of Ignatius Press, had published the first English translation of many of Ratzinger’s works. For this great and faithful Jesuit, his mentor’s election to the Chair of Peter was not only the answer to prayer but a dream come true. His personal joy was an additional reason for my own rejoicing, accentuating the sheer elation of the moment.

One imagines that the same scenes of joy erupted throughout the world wherever two or three faithful Catholics gathered together. In contrast, the election of Ratzinger was greeted with grief and horror by those heretical theologians and cafeteria Catholics whose heresies and backsliding equivocations had been condemned by the new pope during his many years as Prefect of the Congregation for the Doctrine of the Faith. As usual, these wolves in sheep’s clothing howled in unison with the wolves in the secular media, uniting themselves with the avowed enemies of the Church in their hatred of the hero of orthodoxy who had forced them into retreat during his years as John Paul II’s faithful and fearless servant. In the war of words that followed the pope’s election, the enemies of orthodoxy decried the new German Shepherd as “God’s Rottweiler”. Although the gentle and saintly Ratzinger did not deserve such an epithet, it is ironically apt that the wolves who would devour the flock should hate the Rottweiler who had courageously stopped them from doing so!

I feel in Benedict’s presence what G. K. Chesterton felt in the presence of the saintly Dominican, Vincent McNabb. Chesterton wrote that “Father McNabb is walking on a crystal floor over my head”. I feel at least as strongly that Pope Benedict is walking on a crystal floor over my head, not only in terms of his sanctity but in terms of his wisdom and his scholarship. How can one hope to encapsulate someone who is so much larger and higher than oneself? Wouldn’t it be safer and more appropriate to do what T. S. Eliot counseled with regard to the genius of Dante? “I feel that anything I can say about such a subject is trivial,” Eliot wrote to a friend. “I feel so completely inferior in his presence – there seems really nothing to do but to point to him and be silent.” It is, however, significant that Eliot had already disregarded his own advice, even as he was penning his cautionary words of inadequacy to the friend, because he had just finished the writing of an article on “Dante as a Spiritual Leader”. Perhaps, following Eliot’s example and not the letter of his law, it is sometimes permissible to throw caution to the wind in writing about our superiors.

I am further encouraged to throw caution to the wind in defiance of my own sense of inadequacy by the trail that Chesterton blazed in his book on St. Thomas Aquinas. One can only imagine what Chesterton must have felt as he embarked on the writing of this book. After all, the Angelic Doctor was not only walking on a crystal floor over Chesterton’s head, he was also walking on a crystal floor over the saintly head of Father McNabb. As a humble Dominican, McNabb was a follower of Aquinas, as was Dante, both of whom looked up in awe-struck admiration to the crystal floor on which St. Thomas walked.

Aware of the enormity of the task and the inadequacy of his ability to execute it, Chesterton began his study of Aquinas “by answering to the name of that notorious character, who rushes in where even the Angels of the Angelic Doctor might fear to tread”. Having equated himself with the recklessness of the fool, he adeptly and adroitly turned the tables on his potential critics by connecting his foolishness with the folly of St. Francis of Assisi: “Some time ago I wrote a little book of this type and shape on St. Francis of Assisi; and some time after … I promised to write a book of the same size, or the same smallness, on St. Thomas Aquinas. The promise was Franciscan only in its rashness …” In employing the adjective “Franciscan” to qualify his rashness, Chesterton was justifying the folly of a layman, untrained formally in Thomistic philosophy and theology, to write a book on the Church’s preeminent philosopher and theologian. His foolishness may indeed have been that of St. Francis who leapt in faith where fallen angels feared to tread but his focus was that of St. Thomas whose sharpness pointed to a needle on which the fallen angels feared to dance.

Although I can only claim to share Chesterton’s foolishness and not his sharpness, I am consoled by his pioneering example. I have no doubt that the book I have written was worth writing and that the time spent writing it was well spent. How could it be otherwise? It was time spent with Pope Benedict! And this is the reason that I can promise that the book is worth reading and that the time spent reading it will be time well spent. Everyone should spend more time with this wisest and most holy of men, and this best of teachers. We have much to gain in his presence and nothing to lose but the chains of ignorance.

Having made an apology for the inadequacy of this volume in the explanation of what it isn’t, I’d like to conclude these introductory remarks by declaiming unapologetically what it is, or at least what it is intended to be. However inadequate, it shares the same laudable goal as Chesterton’s Aquinas, which, Chesterton wrote, “makes no pretense to be anything but a popular sketch of a great historical character who ought to be more popular.” My goal is the same as Chesterton’s. I wish the following book to be a popular and accessible sketch of a great historical figure, in my judgment one of the greatest popes in the Church’s history, who ought to be more popular. Beyond this simple goal, it makes no pretenses whatsoever.

The ultimate justification for this book is that it is an apology in the other and better sense of the word. It is an apologia, a spirited and heartfelt defense of Pope Benedict’s words and works, a tribute to his life and legacy, a homage to his sanity and sanctity. It is a vigorous defense of a rigorous and vigorous defender of the Faith. For this, at least, I make no apology because no apology is necessary.

Share on FacebookShare on TwitterShare on PinterestShare on EmailShare on LinkedIn
God Has Given Us So Many Signs of Hope — This Is One of ThemPope at Mass: nurture tomorrow’s hope by healing today’s pain