Beautiful Catholic picture books for your children or godchildren 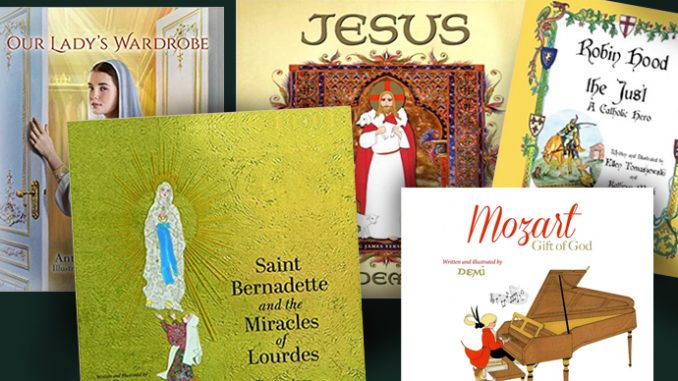 When my youngest brother was born, the hospital signed him up for Dolly Parton’s Imagination Library, a program in which children receive free books in the mail from birth until age five. This is a lovely idea from the famous rags-to-riches country singer, but my parents and I soon discovered something: a lot of children’s picture books these days are just not very good. Classics such as The Little Engine that Could appeared, but so did some stupefying works that contained hardly any complete sentences, let alone any useful knowledge, moral truths, or beautiful art.

Now, in searching out books as gifts for my goddaughter and other children in my life, I have tried to keep three qualities in mind as my criteria for a good picture book: 1) The text should be engaging and not so silly as to degrade a child’s budding intellect. It need not be Shakespeare, but it must not be complete drivel. 2) The implicit or explicit moral of the story should be a true one; at least, nothing immoral should be present. 3) The pictures, though they may be in almost any style, should be beautiful, in order to help form the child’s tastes and captivate his imagination. Again, it need not be Michelangelo, but it must not be actually ugly.

For picture books in particular, the third criterion is perhaps most important: children do hear and understand the words when being read to, but most under the age of four or so will be interested primarily by the pictures. Thus, the books should be beautiful. And what lends itself to beauty, along with truth and morality, better than Catholicism?

Here are several Catholic picture books that I have found and enjoyed, particularly because of their visual beauty.

Our Lady’s Wardrobe, written by Anthony DeStefano and illustrated by Juliana Kolesova (Sophia Institute Press, 2020) uses rhyming text to describe several of the most famous Marian apparitions, through the lens of what Our Lady was wearing when she came to visit.

The book begins by pointing out that, while on earth, Mary was poor and wore simple clothing, but as Queen of Heaven she can wear any dress she wants. Then follow the various apparitions, highlighting in both word and illustration the details of her brilliant attire: the starry cape at Guadalupe, the green sash at Knock, the roses on her feet at Lourdes, and more. The messages and events of the apparitions are also summarized.

The concept is simple, yet brilliant: little girls typically love clothes, so, rather than setting a fondness for pretty dresses against the simplicity of the Blessed Virgin of Nazareth, the book embraces both. The different colors and details of the outfits help the child remember the different apparitions more easily and, hopefully, draw her to a deep Marian devotion with time.

Speaking of Marian apparitions, Saint Bernadette and the Miracles of Lourdes, written and illustrated by Demi (Magnificat/Ignatius Press, 2017) tells the story of young Bernadette Soubirous and her encounters with the “beautiful lady” of the grotto who turned out to be the Immaculate Conception.

Demi is well-known for her stunning illustrations, using a combination of gentle watercolors, patterned collage pieces, and shimmering gold, reminiscent partly of Fra Angelico and partly of a Byzantine mosaic. Children will be captivated by the minuscule details of the images in all her many books: one child I know, who is just learning his animals, was particularly enraptured by certain pages of her work on St. Francis of Assisi.

Her other books include Joan of Arc (Two Lions, 2011), Hildegard of Bingen: Scientist, Composer, Healer, and Saint (Wisdom Tales, 2019), The Legend of Saint Nicholas (Margaret K. McElderberry Books, 2003), Mother Teresa (2010), Jesus (2005), which takes its text verbatim from the King James Bible, and Mary (2006), a biography of Our Lady herself, which takes its text both from the Gospels and the apocryphal texts on Mary’s life.

She has also created many other books on non-Catholic historical figures and re-tellings of ancient folk tales. Ignatius Press recently published her biographies of three people who are not Catholic saints, but whose spirituality and virtue played a major role in their lives. George Washington: His Legacy of Faith, Character, and Courage (2018) is a refreshing (in these times) portrayal of one of our nation’s founders that emphasizes his Christian belief and trust in God, as well as genuine patriotism, as key to his success. The Spirit of Hiawatha (2020) tells the legendary story of the Native American peacemaker who brought the five Iroquois nations together after years of strife, thus (according to this telling) paving the way for the Gospel to be preached among them. Finally, Mozart: Gift of God (2019) is a moving account of the too-short life of the devout man who composed the famous Te Deum and Requiem, ascribing all his talent to Divine inspiration.

The stories Demi tells balance strict facts with legendary elements, always with a sincere respect for the person portrayed, and the illustrations are such works of art that even an adult can enjoy feasting his eyes on them while reading to a child.

In a similar vein comes Robin Hood the Just, written and illustrated by Ellen Tomaszewski and Kathryn Mack (TAN Books, 2020). Inspired by a 15th-century ballad called Robin Hood and the Monk, the story tells how Robin Hood was a pious Catholic who attended Mass and prayed to Our Lady daily, even while living as an outlaw in the forest. The emphasis is on Robin Hood’s piety leading to a desire for justice: he returns stolen horses and gives food to the hungry. The words are simple and wholesome, and the illustrations are lovely. Each page imitates an illuminated manuscript, with intricate borders of vines and shields around simple, expressive pictures.

Most Americans now are familiar with Robin Hood through the goofy Disney movie or perhaps through secular re-tellings that focus primarily on the adventurous life of being an outlaw and the romance with Maid Marian. While those portrayals are fun, it’s refreshing to see this centuries-old legend presented for children in a way that takes seriously the Catholic piety that was a staple of older Robin Hood literature, and makes it visually appealing in the process.

While there are doubtless many more Catholic picture books that meet my criteria above—even as I write, I remember the wealth of Catholic books written and illustrated by the late, great Tomie DePaola, may he rest in peace. But perhaps the books I have named are somewhat lesser known, yet still worthy of attention.

Share on FacebookShare on TwitterShare on PinterestShare on EmailShare on LinkedIn
Over 100 civilians killed in Burkina Faso massacre: Worst attack in recent years.Looking to Summer 2021