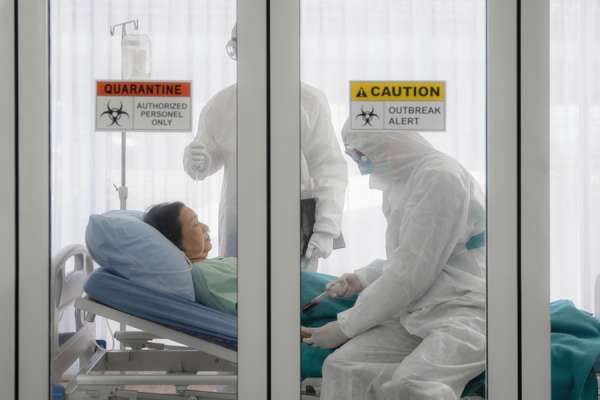 Washington D.C., Jan 6, 2021 / 12:25 am (CNA).- Los Angeles County has announced it is limiting non-COVID emergency care, due to hospitals having reached a “point of crisis” during the pandemic, promoting ethicists to discuss whether the act is justified.

On Monday, the Emergency Medical Services Agency for Los Angeles County issued two directives limiting emergency care during the pandemic, because of a spike in COVID hospitalizations.

One directive stated that emergency medical personnel should not transport patients who suffered cardiac arrest to the hospital, if they could not be revived in the field. The directive was given “due to the severe impact of the COVID-19 pandemic on EMS and 9-1-1 receiving hospitals.”

Another directive stated that supplemental oxygen should only be given to patients with less than 90% oxygen saturation due to “the acute need to conserve oxygen.”

The actions were taken as the number of COVID hospitalizations is expected to spike after the Christmas holiday season, according to the Los Angeles Times.

One medical ethicist told CNA that the county had to make a difficult decision in extraordinary circumstances.

“I think they have gone about a very difficult decision in a reasonable way,” said Dr. Barbara Golder, staff member with the Catholic Medical Association, in an interview with CNA.

With the virus spreading around the country, many local health systems are seriously burdened or at capacity, Golder said. “I’m inclined to believe that this is, in fact, a very extraordinary circumstance,” she said in reference to Los Angeles.

The county’s director of health services, Dr. Christina Ghaly, stated on Monday that many area hospitals “have reached a point of crisis and are having to make very tough decisions about patient care,” according to the Los Angeles Times.

She added that the current numbers of COVID cases in the county are still reflective of the post-Thanksgiving surge with a post-Christmas surge yet to come—a point that Golder also made.

“It’s not going to get better,” she said of an anticipated post-Christmas surge of virus cases looming. “It’s really bad right now.”

Los Angeles county has seen an increase in COVID-19 cases since the end of October. More than 9,100 new COVID cases were reported on Monday, according to county health data. In some areas, ICU bed shortages have been a concern.

There have been a total of 10,850 deaths and more than 827,000 confirmed COVID cases overall in Los Angeles County, according to data provided by Johns Hopkins. While the number of reported cases is the highest by far among U.S. counties—Los Angeles is the most populous county in the U.S.—the rate of 8,189 infections per 100,000 residents is high, but is topped by many other counties around the country.

However, Charles Camosy—a theology professor at Fordham University—emphasized that care is being limited in Los Angeles due to an expectation of a further COVID surge, and not because hospitals are already overwhelmed.

“To be clear, they are *not* overwhelmed now. This directive is in *anticipation* of having traditional capacity (no hospital ships, no converted convention centers, no cooperating facilities in other counties) overwhelmed,” he tweeted.

Ghaly, explaining the county’s policy of not transporting cardiac arrest victims who had not been resuscitated in the field, said that the county was “emphasizing the fact that transporting these patients arrested leads to very poor outcomes.”

“We knew that already and we just don’t want to impact our hospitals,” Ghaly said.

he phrase ‘poor outcomes’ is quite suggestive,” adding, “it is likely that [Ghaly] and others mean that patients who are likely to survive cardiac arrest for the during of an ambulance ride are likely to be disabled in ways which lead them to judge that a limited number of beds should be given to able-bodied patients.”

However, Golder said that it is not necessarily unethical to limit care for patients with a low expectation of survival—if the situation is one of true “triage” where demand for care is great and resources are limited, and as long as patients are not denied care on the basis of age or disability.

According to studies, patients suffering cardiac arrest who are taken quickly to a hospital still have around only a 5% chance to survive and eventual discharge, she said. During a pandemic, they would essentially be competing with COVID patients for limited health care resources.

While this population may be mostly elderly, she said, it could also include younger patients—and the county’s policy did not explicitly discriminate against the elderly.

“Nobody likes to see these things happen,” she said. “There’s always a limit on what we have available, and sometimes our demand exceeds it. And we’re just there, we’re there all over the country.”

In the spring of 2020, Camosy was one of three scholars to warn against health care triage plans that explicitly discriminated against the disabled.

As doctors in various jurisdictions were considering how to ration health care if hospitals were overwhelmed with an influx of COVID patients, Camosy was joined by Princeton law professor Robert George and Harvard sociology professor Jacqueline Rivers in demanding that care not be denied patients on the basis of their age or disability.

“As somebody who has studied bioethics, and who is a professor of bioethics, I know the overwhelming majority of them have virtually no ethics training,” Camosy told CNA.