Archbishop Morandi: “A manual to explain how to act when abuse is reported” 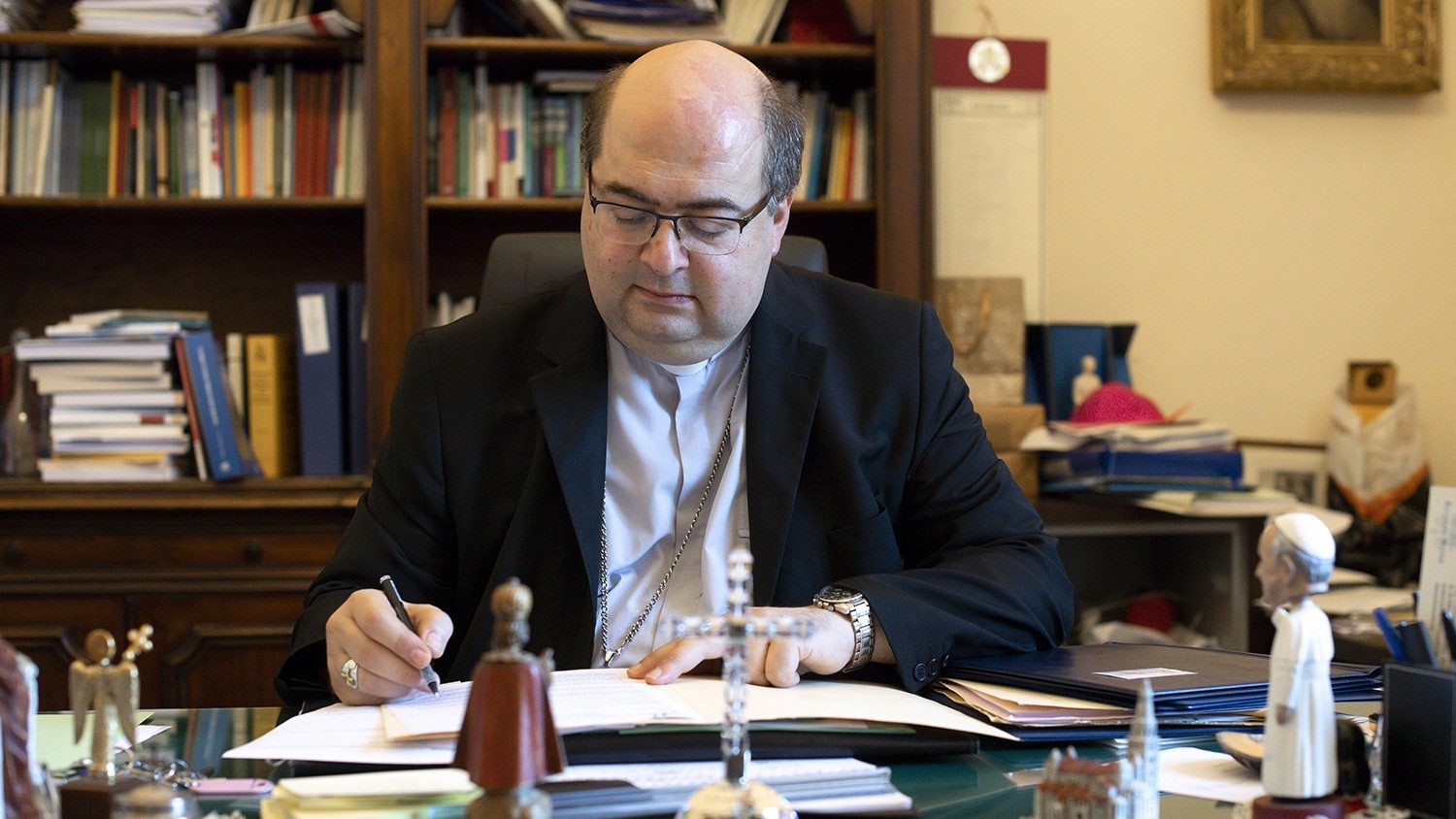 A manual designed for Bishops and Religious Superiors to guide them in dealing with cases of reported abuse.

Archbishop Giacomo Morandi, Secretary of the Congregation for the Doctrine of the Faith, gave that description of the Vademecum released on Thursday, in an interview with Vatican media.

What follows is a working translation of the complete interview translated from the original Italian.

Q: Who prepared this document, and why has it taken so long to reach publication after it was first announced in February 2019?
It was prepared by the Congregation, thanks above all to the contribution of the Discipline Office, which in recent years has acquired particular experience regarding the cases in question. The apparently long drafting time is due to extensive analysis work, not only within the Congregation but also outside of it, with experts in the field, other Dicasteries, and in particular with the Secretariat of State.

Q: What is the purpose of this Vademecum, and to whom is it addressed?
I prefer to define it, along with the Prefect of our Congregation, as a “manual”. It is not, therefore, a normative text, but a tool at the disposal of Bishops, Religious Superiors, ecclesiastical tribunals, legal professionals, and also those in charge of listening centers set up by Bishops’ Conferences. Given the complexity of norms and best-practices, this guide aims to point out a path, to assist in not getting lost.

Q: Does this document contain new indications with respect to previous ones?
No. No new rules are being promulgated. The real novelty, however, is that for the first time the procedure is described in an organized way – from the first report of a possible crime to the definitive conclusion of the cause – uniting the existing norms and the praxis of the Congregation. The norms are well-known, while the practice of the Congregation, that is, the practical way of applying the norms, is known only by those who have already dealt with these cases.

Q: Is the Vademecum a closed and set document, or will it be updated?
Precisely because it is a tool, a manual, it lends itself to continuous updating. Updates will be made based both on possible future changes in penal law, and to clarifications and requests that may come from local Ordinaries and legal practitioners. In this sense, the version that comes out today is called “Version 1.0”, which can be updated. Any assistance in improving it is a welcome service to justice.

Q: What cases fall under the competence of your Congregation?
In general, the crimes reserved to our Congregation are all those against the faith, and only the most serious (in the language now in use we commonly speak of delicta graviora) against morality and the administration of the Sacraments. The Vademecum, however, refers to only one of these crimes, which article 6 of the Motu proprio Sacramentorum Sanctitatis Tutela applies to a cleric when he commits an offense involving a minor that violates the Sixth Commandment of the Decalogue. These are the cases that make the most headlines in the media, also because of their seriousness.

Q: When does the Church consider it a matter of abuse of “minors”? How has the age limit changed?
In the criminal sphere, a minor is a person who has not yet reached the age of 18. Other age distinctions, which refer to ages below 18, are not relevant in this sense. The Latin Code of Canon Law, in can. 1395 § 2, still speaks of 16 years of age, but the Motu proprio Sacramentorum Sanctitatis Tutela promulgated by John Paul II in 2001 raised the age to 18. Cases of “abuse” (as just said, an ‘offense involving a minor that violates the Sixth Commandment of the Decalogue’) are often easy to delineate, for example sexual relations as such, or other instances of physical contact that are not properly “relations” but have a clear sexual intent. Other times, however, cases are not so easy to delineate, involving nuances that must be evaluated to determine if they are delicta graviora in the juridical sense according to laws in force at the time.

Q: What is most striking is the change in attitude towards anonymous complaints, which were once simply thrown out. What has changed, and why should an anonymous complaint still be taken into consideration?
This is a delicate question. It has become clear that a peremptory attitude in one sense or another is not conducive to the search for truth and justice. How can a complaint which, even if anonymous, contains certain evidence (e.g. photos, films, messages, audio…), or at least concrete and plausible clues of the commission of a crime, be thrown out? Ignoring it just because it is not signed would be wrong. On the other hand, how can all reports of abuse be accepted, even generic ones and those without a sender? In this case, it would be inappropriate to proceed. It is therefore necessary to carry out a careful discernment. Generally speaking, we do not fully credit anonymous complaints, but we also do not forego a priori their initial evaluation, in order to see if there are objective and obvious determinants, those which we call fumus delicti in legal language.

Q: How much have the most blatant cases of recent years influenced the development of this document and other recent texts on the subject?
More publicized cases are treated in the same way as the lesser known cases, always according to the rule of law. We do not have “subjects” before us, but people: the accused, alleged victims, possible witnesses… In general, there is always a picture of particular suffering. Certainly, media attention regarding the issues in question has multiplied in recent years, and this is a further stimulus to the Congregation to try to do justice in an ever more correct and effective way. For this reason, also, the Vademecum will be of help.

Q: Are Bishops and Religious Superiors obliged to report news of alleged abuses committed by clerics even to civil authorities?
On this point the national Bishops’ Conferences have prepared guidelines that take into account local regulations. It is impossible to give a single response. In some countries the law already provides for this obligation, in others it does not. In fact, the Motu proprio Vos estis lux mundi promulgated last year by Pope Francis expresses in these terms that the Church acts in cases of this kind “without prejudice to the rights and obligations established in each place by state laws, particularly those concerning any reporting obligations to the competent civil authorities” (Art. 19). On the other hand, paragraph 17 of the Vademecum also states: “Even in cases where there is no explicit legal obligation to do so, the ecclesiastical authorities should make a report to the competent civil authorities if this is considered necessary to protect the person involved or other minors from the danger of further criminal acts.”

Q: What is an “extrajudicial penal process”? When and why is this path pursued?
It is a procedure provided for by the two Codes of Canon Law in force. It is a more expeditious route. At the conclusion of the extrajudicial penal process, the Ordinary (or one of his delegates), assisted by two assessors, comes to a decision on whether or not the accused is guilty and (if guilty, with moral certainty) on the proportionate penalty to be imposed. There are pros and cons in this procedure, which is also known as an “administrative” procedure. The extrajudicial path is pursued when, for example: the facts are clear; the criminal activity reported is already confirmed by the accused; the Ordinary asks that this be done for well-founded reasons; the Congregation considers that it is appropriate on the basis of the particular circumstances (qualified personnel, geography, timeliness, etc.). Naturally, the right of defense of the accused must always be absolutely guaranteed. For this reason, also, the extrajudicial process in Latin law provides for up to three possible degrees of appeal, in order to ensure as much as possible the objectivity of the judgment.

Q: We are talking about crimes that are usually committed without the presence of witnesses. How is it possible to verify the validity of the charges to ensure that the guilty parties are punished and can no longer harm others?
We use trial tools which are commonly employed to verify the reliability of evidence. Many crimes, not only those in question, are committed without witnesses. But that does not mean that we cannot arrive at certainty. There are procedural tools that allow this: the reliability of the persons involved, the consistency of the facts declared, the possible seriality of the crimes, the presence of documents containing evidence, etc. It must be said that on several occasions the accused, aware in conscience of the evil committed, admits to it in court.

Q: How can we avoid that an innocent person be unjustly accused and condemned?
When the facts are not sufficiently proven, the principle of in dubio pro reo applies. This principle underpins our legal culture. In these cases, rather than declaring innocence, one declares not guilty.

Q: Why can a cleric, when accused of abuse, immediately ask for dispensation from celibacy?
That is true: when a cleric recognizes the crime and his unfitness to continue in ministry, he can ask to be dispensed. Thus, he remains a priest (the Sacrament cannot be revoked or lost) but no longer a cleric: he leaves the clerical state not by resigning but by making a conscious request addressed to the Holy Father. This is a different way of achieving the same result regarding the juridical condition of the person: a former cleric who can never again present himself as a minister of the Church.

Q: One final question: Can you provide some data on the dimension of the phenomenon? Are the new norms only bringing to light cases from the past, or is the scourge of child abuse still present within the Church?
The phenomenon is present on all continents, and we are still witnessing reports emerge of old cases, sometimes many years later. Certainly, some crimes are also recent. But when this phase of past cases emerging comes to an end, I am convinced (and we all hope so) that the phenomenon we are witnessing today can recede. It must be said, however, that the path of truth and justice is one of the Church’s ways of response. Necessary, certainly, but not sufficient. Without adequate formation, careful discernment, and serene but decisive prevention measures, this wound we are witnessing today will not be able to heal.

The full text of the Vademecum can be accessed by clicking here.

FacebookTwitterPinterestEmailLinkedIn
CDF issues manual for bishops on how to handle reports of clerical abuse of minorsVatican issues Vademecum: procedures regarding cases of sexual abuse of minors