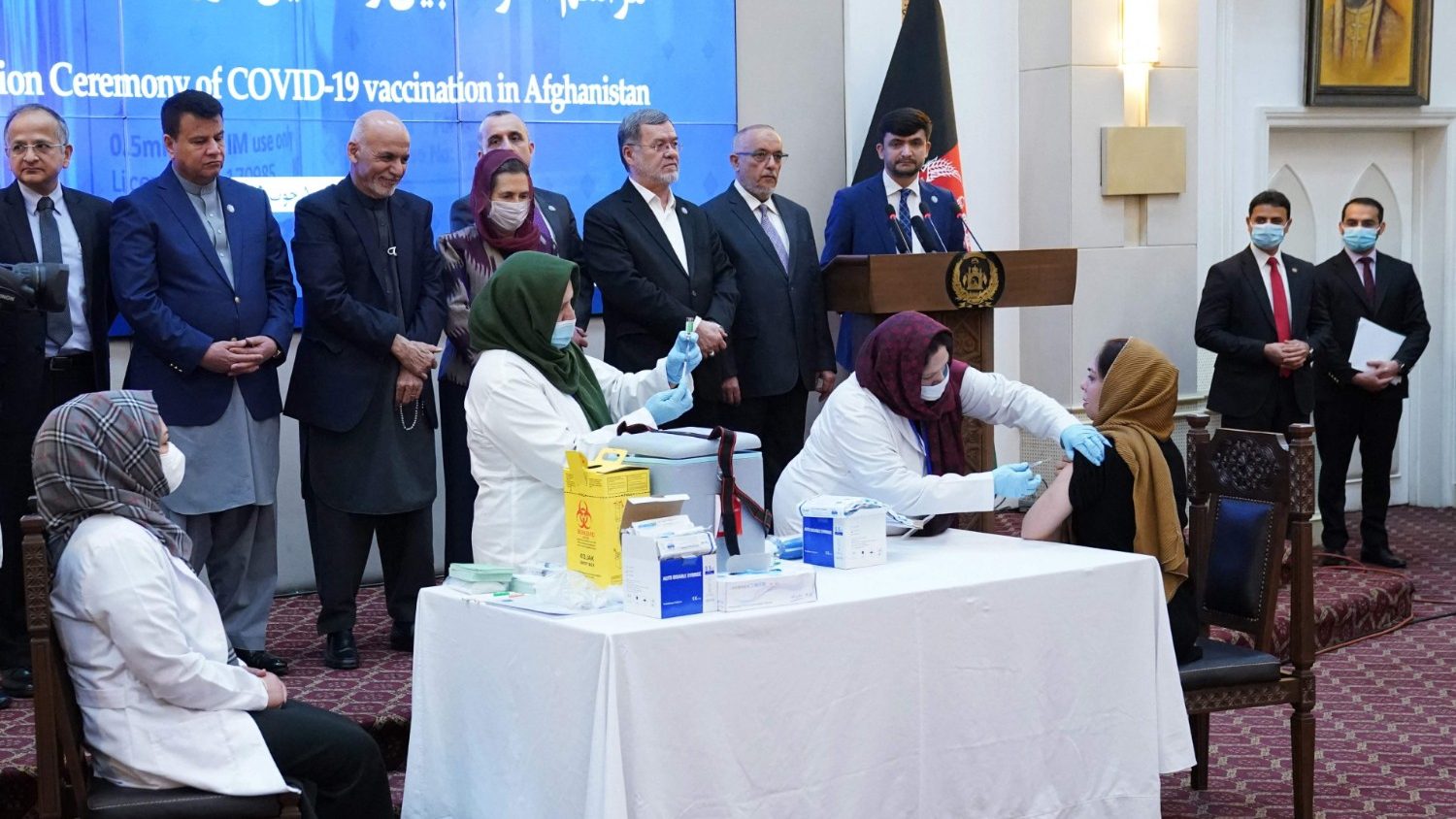 The first consignment of 500,000 doses of Astra-Zeneca’s vaccine arrived earlier this month from Serum Institute of India (SII), which is producing the vaccine for mid- and low-income countries.

“This is a great opportunity and a great test for the Health Ministry and the entire nation. I call on all segments of the society to work with the Health Ministry,” President Ashraf Ghani told a special ceremony at the presidential palace in Kabul.  Several Afghan leaders were present at the inauguration.

“Today is a fortunate day for Afghanistan as we launch the first vaccination drive, but it would be a challenge to roll the plan to the whole country,” said acting health minister Waheed Majroh.  He said the first phase of the programme aims to vaccinate some 250,000 people from the security forces, health, education and the media.

The Covid-19 vaccination drive could be a daunting task given a surge in violence in the last quarter of 2020.  The government and the Taliban insurgents opening peace talks in September. The discussions have produced no progress so far.  However, Taliban insurgents fighting the foreign-backed Afghan government have announced their backing for the vaccination programme.

In a report on Tuesday, the United Nations Assistance Mission in Afghanistan (UNAMA) and the UN Human Rights Office pointed to a rise in civilians killed and injured in Afghanistan following the start of peace negotiations last year.

The Afghanistan Peace Negotiations that began between representatives of the government and the Taliban in Qatar on 12 September, the report said, “failed to alleviate the scale of civilian harm, a key indicator of violence levels.”  “Instead, there was an escalation of violence with disturbing trends and consequences.” However, the UN report noted that overall numbers for 2020 were down due to lower civilian casualty rates earlier in the year.

Some 20 percent of Afghanistan’s 38 million people are scheduled to receive the Covid-19 vaccine under the COVAX (Covid-19 Vaccines Global Access) programme, an initiative established by the United Nations World Health Organization (WHO) and its international partners to buy and deliver the vaccines for the world’s poorest countries.  COVAX has pledged $112 million for vaccines to Afghanistan.

Ghani said the pandemic is still a serious problem for the country and called on health workers to vaccinate people in a fair and transparent manner.  The second round of inoculation aims to cover 40 percent of the population, he said. Majroh said they don’t expect miracles but urged all to help implement the campaign justly.

Afghanistan has registered over 55,600 cases of infections and more than 2,400 deaths. But experts say cases are significantly under-reported due to low testing and limited access to medical facilities in the country.

Last week, UN Secretary-General Antonio Guterres criticized a “wildly uneven and unfair” distribution of vaccines between the rich and poor countries of the world.  More than 130 countries have not received a single dose of the vaccine, while 10 countries have administered 75 percent of all vaccinations, he told a high-level virtual meeting of the Security Council.

At the meeting, Executive Director of the UN Children’s Fund, UNICEF, Henrietta Fore also appealed for access to vaccines for all.  “The only way out of this pandemic for any of us is to ensure vaccinations are available for all of us,” she said.

Share on FacebookShare on TwitterShare on PinterestShare on EmailShare on LinkedIn
Democratic Republic of Congo: Italian ambassador killed in attack on UN convoyCatholic leaders urge EU to be guided by solidarity in vaccine distribution