In his essay, “A Secret Vice,” originally a 1931 lecture at Pembroke College, Oxford, J.R.R. Tolkien wrote of a “secret hierarchy” of individuals who have the curious hobby of constructing their own languages. Perhaps the most famous passage in the essay is one in which Tolkien recounts encountering another creative language-fashioner in an unpleasant pub. 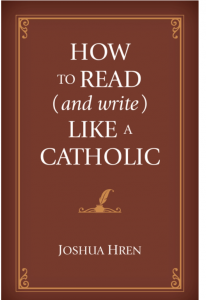 Tolkien, of course, would go onto to create an entire world populated by multiple fantastic races, possessing their own unique and complex language. While Tolkien’s description of the secret hierarchy of language creators is of an especially strange and eccentric sort of people, a similar community exists among the increasingly rare species of human who willingly reads books for both edification and pleasure.

Indeed, even among American Catholics, the joy of finding another Catholic who enjoys reading, and perhaps even writing, literature is a relatively rare phenomenon.

Nonetheless, there is a small but serious cadre of Catholics who enjoy reading and who did not intentionally sleep through their English classes in college.

However, even among the Catholic literati, there is a great deal of confusion about what to read—and even how to read.

On one hand, reading Catholics are often told by they must read (and teach their children) the “classics” or “great books.” Yet, when they read many of these works, some are surprised or even shocked by the impurity, violence, and ultimately un- or even anti-Christian message of a number of the books in the “Western Canon.”

In his new book How to Read (and write) Like a Catholic, Joshua Hren, editor of Wiseblood Books and co-founder of the MFA program at the University of St. Thomas, Houston, seeks to provide a cautious map through the world of (largely but not completely) late modern fiction. Hren’s work is unique in that he does not simply echo and repeat the same (noble and true) talking points that have circulated about “Great Books” circles for almost one hundred years.

As opposed to presenting the familiar panoply of and Catholic and classic authors that have (in one sense, rightly) filled many late twentieth and early twenty-first century works of Catholic literary criticism, Hren wrestles with a wide variety of Catholic, non-Catholic, and even semi-Catholic, authors ranging from Jack Kerouac and David Foster Wallace, to Gustave Flaubert and Homer, to Caroline Gordon and Friedrich Nietzsche.

Moreover, rather than being rapt by the aura surrounding “la république des lettres” or, in contrast, labeling those authors outside of postmodern conservative American Catholic polite society as being “the bad guys,” Hren carefully navigates through a host of thinkers. In doing so, he picks and prunes those elements of their thought that are consonant with Catholic thinking while dismissing those that are not.

Hren’s argument is guided by John Henry Cardinal Newman’s famous dictum that literature should serve as portrait of “man in rebellion” while at the same time noting that, as Popes John Paul II and Benedict XI, as well as contemporary Catholic poet and critics Dana Goia argue, a Catholic vision of literature should wrestle with the issue of suffering and redemption of man, which is at the heart of the Christian mythos.

As Hren notes, the big three of twentieth-century Catholic writers—Shusaku Endo, Flannery O’Connor, and Walker Percy—themselves taking the great 19th-century Eastern Orthodox novelist Fyodor Dostoyevsky as their model, all depict humankind in state of sin in which the “hard rudiments of grace” are difficult to find. These authors—especially Endo—have drawn criticism for their often tortuous and murky depiction of human encounters with grace and sin, and many of their works have left Catholic readers, tutored on the more “theologically formalist” approach of classic writers like Dante Alighieri.

However, it is precisely because of their desire to depict the experience of men and women thrown into a confusing and difficult (and sinful) world that these authors do not provide easy or tidy answers.

This does not mean that Hren endorses a carte blanche approach for authors to revel in sin and doubt. Rather, the Catholic author and reader are both called to follow the model set forth by the Church’s tradition, which is a life raft in the stormy sea of what is now called “post-postmodernism.”

The most difficult quality of contemporary literature and art is not that it present a too harsh and explicit of a vision of sinful humanity (even though it does do that); rather the key issue with contemporary fiction (and popular media) is that it presents evil as something normal and, indeed, good.

Our period is one of tremendous darkness and confusion; it feels like a diabolical disorientation has set in on the world and the Church, and Christians are nothing but losing battle after battle in the culture war.

However, Joshua Hren’s rich and robust How to Read (and write) Like a Catholic is a small, flickering light in the darkness. It proffers a map to the labyrinthine grey and bland world built on the ruins wrecked by postmodernity. However, Hren’s work is equally importantly a reminder that amidst this odd carnival of evil, there are still moments of grace and epiphany.

How to Read (and write) Like a Catholic
By Joshua Hren
TAN Books, 2021
Hardcover, 480 pages

Share on FacebookShare on TwitterShare on PinterestShare on EmailShare on LinkedIn
BREAKING: In midst of unprecedented protests in Cuba, Christian Movement calls for free electionsSummit on aging in men's religious orders to examine grief, hope